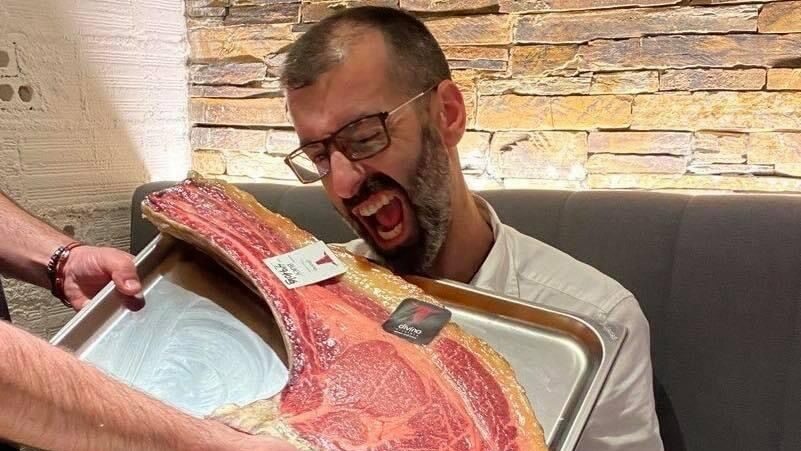 Tall, strong, cinnamon to orange in colour and a “nice sexy name” are the attributes of an animal that a beef industry pioneer believes will be the latest thing on the menu at Australia's best restaurants.

The new breed of cattle is David Blackmore's "retirement" plan. He was the mastermind behind premium Wagyu cattle in Australia.

Mr Blackmore's Wagyu meat, grown on farms in north-east Victoria has sold for more than $500 per kilogram and appeared on luxury menus around Australia and the world, including in the home of Wagyu, Japan.

His latest project is a breed of cattle that he has imported into Australia called, Rubia Gallega.

"They call it cinnamon colour through to orange, they are solid coloured, they are a horned breed and they've certainly got more muscling than the traditional British breed cattle we have in Australia," Mr Blackmore said.

Rubia Gallega is a heritage breed of cattle grown in the Galicia region of Spain which includes the popular pilgrimage location of Santiago De Compostela.

It was in France around 15 years ago when Mr Blackmore first tasted the meat, starting a long odyssey for the breeder to seek out the required genetics and get the cattle to Australia.

"These animals had been bred up as a plough animal to pull ploughs and carts and we even found one farm where they were still doing that 15 years ago."

"They are a work animal and they have developed marbling (fat distribution through the meat); not as good as Wagyu but better than anything I've seen off grass," Mr Blackmore said.

But it was not easy for Mr Blackmore to get the genetics he wanted.

Many of those embryos have now been born and Australia now has its first herd of Rubia Gallega with plans to grow.

"I suppose we bought cattle from five to six different farms plus the blood lines from the bull stud," Mr Blackmore said.

It is early days, but cattle are now being served as a test for some of Australia's best restaurants.

Rubia Gallega cattle are big and the steaks they produce are too.

One animal can produce about 700 kilograms of meat, which the restaurants use in an array of dishes for their customers.

Mr Blackmore hopes the unique flavour and grass-fed story behind the breed will be a hit with diners.

"It's very tender. It's got a very fine texture because of the marbling and being grass fed, it's a completely different, distinct flavour, an earthy, nutty flavour."

“And Rubia Gallega is a nice, sexy name!"

Rubia Gallega has arrived in Australia but do not expect it to be widely available like Angus or Wagyu.

David Blackmore insists it is his retirement project and it will be a premium beef with plans to process just 30 animals a week.