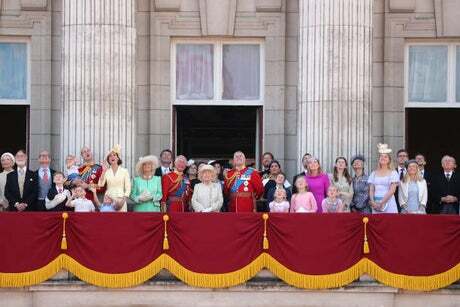 Queen Elizabeth II: How many children, grandchildren, and great-grandchildren does she have?
The Queen’s children and grandchildren have supported her in recent months, as she has missed events due to mobility issues.

Tribune News Service
When is the Queen’s Platinum Jubilee?

Sports Illustrated
From analysis to good news, read the world’s best news in one place
Jim Nantz Shares How He Coined His Signature ‘Hello Friends’

Since leaving their lives as working royals behind them, Prince Harry and Meghan Markle have been dabbling in the entertainment industry over recent years - with a Netflix deal and explosive televised interviews.

But will we ever see the super-famous couple enjoy a stint on British daytime TV?

Anne Hegerty would certainly love to the glamourous pair make a cameo on The Chase one day.

Speaking exclusively to the Mirror on Tuesday, the quiz guru - who recently discovered she's distantly related to Queen Elizabeth II - mused which members of the royal family she believes would have what it takes to beat the Chaser.

Last month, it ITV star 63, found out she is 19th cousin to Queen Elizabeth II, 95, and King Robert the Bruce was her 20-times great grandfather.

Quizzed about which member of the British Royal Family she could see giving us a run for her money on The Chase, Anne also confessed her love for Harry and Meghan - joking she's one of the few people in Britain to like to much-talked about pair.

"They always used to say that Prince Edward was 'Educated Eddie' - I don't know if he is," Annie began when weighing up potential royal opponents for the ITV show.

"I think it might be one of the slightly semi-detached ones like Lady Sarah Chatto - I think she's a smart arse."

But when it comes to who she'd like to see in the greenroom for a drink after the show, it's Harry and Meghan all the way for Anne.

"I seem to be the only person left in Britain who likes Harry and Meghan. I would love to go for a drink with them."

Anne's royal chat comes after she made some surprising discoveries about her family tree during a recent episode of ITV's DNA Journey.

After being told she is 19th cousin to Queen Elizabeth II, the quiz genius revealed that her grandmother had previously told her this but she didn't believe her.

Speaking to the show's historian during the show broadcast, the Chaser said: "Wow, that is cool. But my grandmother was the most tremendous liar.

"My aunt said she was a romancer and she'd embroider life a bit, so I always felt that anything from my grandmother had to be taken with a pinch of salt."

It was found that Anne was related to the family bearing the surname Hayes on her mum's side. One of the family members married the King's daughter Princess Elizabeth in 1370.

Anne continued: "My mother was always deeply disapproving of the idea of anyone knowing about their ancestors. She'd say, "It doesn't prove a thing, dear."

"As a child I was always curious about this stuff and my mother was always very repressive.

"I think it was because on my mother's mother's side there's quite a bit of posh, and my mum thought I'd grow up to be a terrible snob."

The MEN Pride of Manchester Awards, in partnership with TSB, will premiere on YouTube at 7pm on Tuesday 17 th May – youtube.com/prideofbritainawards

Queen Elizabeth II: How many children, grandchildren, and great-grandchildren does she have?
The Queen’s children and grandchildren have supported her in recent months, as she has missed events due to mobility issues.

Tribune News Service
When is the Queen’s Platinum Jubilee?