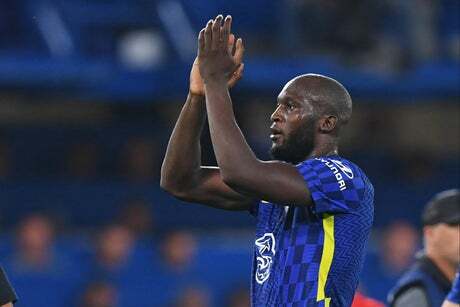 Another game and another demonstration from Romelu Lukaku of what Chelsea were missing.

On another day this would have been a desperately disappointing start to the defence of their Champions League title.

While it was not a game to stir the soul of Stamford Bridge, Lukaku’s 69th-minute header gave the home crowd something to cheer, ensured Chelsea’s unbeaten start to the season was maintained and avoided a potential upset against a stubborn Zenit.

That is four goals in four games for the Belgian – and had he not been at the point of Chelsea’s attack, it is hard to imagine how they would have picked up three points in their opening game of Group H.

Zenit had defended deep, denying Chelsea space to get in behind and create openings.

Up front, they created a number of chances themselves, which required last ditch interventions from Reece James and Toni Rudiger in particular, while substitute Artem Dzyuba should have scored an equaliser late on when missing the target from inside the six-yard box.

Chelsea needed their No9 just as they needed him – or someone like him – for much of last season.

Rising high to meet Cesar Azpilicueta’s swinging cross, he directed his header down into the turf and the corner of Stanislav Kritsyuk’s goal to give the Zenit goalkeeper no chance.

That was enough to settle a contest short on thrills, a rare moment of quality that Chelsea exploited to the fullest.

For much of the game Lukaku had been as frustrated as the Stamford Bridge crowd, desperately starved of service, not for want of his movement or willingness to run. Mason Mount was particularly guilty of failing to find the striker.

But the deadliest centre forwards tend to find their moment in even the tightest of games.

The beauty of Lukaku is the variety of ways he can be found. With no room in behind to run in to, instead he made himself a target in a congested box. Azpilicueta just had to deliver the ball into the right area and Lukaku did the rest.

If he deserves credit for his decisiveness in front of goal, so does Thomas Tuchel for changing the pattern of the game at half time. Having toiled during the first 45 minutes, there was a noticeable change in the pace of Chelsea’s play after the break.

Hakim Ziyech registered their first shot on target in the 47th minute. There was an urgency that had been lacking – players moving the ball quickly to unsettle Zenit’s rigid rear-guard.

Within moments Toni Rudiger was charging the full length of the pitch to get supporters out of their seats. There was a collective holding of breath as they waited for him to apply the finish to what would have been one of the great Champions League goals. Instead his effort went narrowly wide.

It may not have broken the deadlock, but it served in lifting the Bridge from its slumber. Reece James saw an effort hit the side netting as Chelsea began to ask questions.

Rudiger’s intervention was required at the other end when Sardar Azmoun burst beyond Azpilicueta. And the it was Azmoun whose crossed was begging to be turned in by Dzyuba as Zenit went in search of an equaliser following Lukaku’s opener – only to fire wide.

In a game of fine margins those moments can be the difference – and in Lukaku, Chelsea have signed a difference-maker.