Quite where Europe’s new third-tier club competition would rank in his list of achievements is certainly up for debate, although few would doubt a win would move to make up for a first season in charge that has proved difficult at times.

Way off the pace in keeping up with Serie A’s top four, Mourinho can endear himself to the club’s support should he claim a first title for the Giallorossi in 14 years.

Having not won a trophy himself since 2017, adding yet another to Mourinho’s list would vindicate the decision to appoint and subsequently back him from a Roma perspective.

Feyenoord, meanwhile, are the competition’s highest scorers and are yet to lose a game. After a stunning run to the final, beating an expensively-assembled side from one of Europe’s major leagues would be some achievement.

Here’s everything you need to know about tonight’s game...

The Europa Conference League final is scheduled for an 8pm BST kick-off time tonight, Wednesday May 25 2022.

The Air Albania Stadium in Tirana will host the match.

Where to watch Roma vs Feyenoord

TV channel: In the UK, tonight’s game will be broadcast live on BT Sport 1 and BT Sport Ultimate, with coverage beginning at 7:30pm.

Roma have been far from perfect under Mourinho’s watch but, given his record in finals, it’s impossible to look past him. 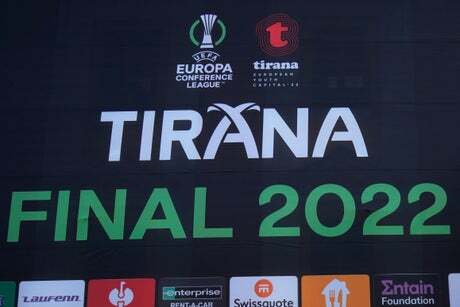 Evening Standard
One subscription that gives you access to news from hundreds of sites
Is Roma vs Feyenoord on TV? Kick-off time, channel and how to watch Europa Conference League final

The Independent UK
Roma vs Feyenoord live stream: How to watch Europa Conference League final online and on TV