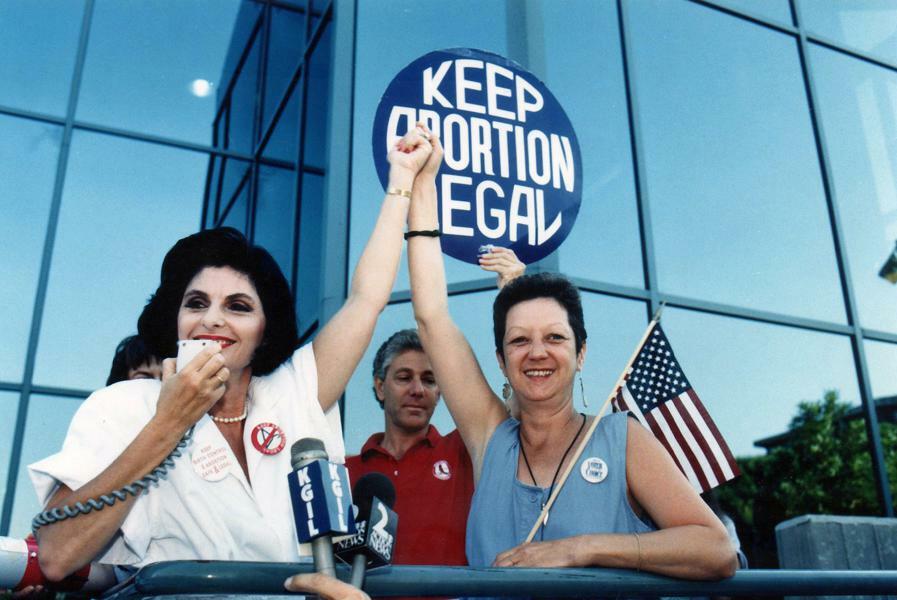 The baby whose conception led to the Supreme Court case that established the right to have an abortion in the U.S. publicly revealed her identity for the first time Thursday, describing the emotional weight she carried being “the Roe baby,” touted for decades as a powerful symbol of one of the most divisive debates in American society.

Shelley Lynn Thornton, now a 51-year-old woman, revealed her name and spoke to the press on-the-record for the first time in an excerpt of the upcoming book “The Family Roe: An American Story,” published Thursday in The Atlantic by journalist Joshua Prager, who has been in contact with Thornton since 2012.

Thornton said she learned of her connection to the Roe case when she was 18 years old after being tracked down by a private investigator hired by The National Enquirer, a tabloid that teamed up with her birth mother Norma McCorvey, known as “Jane Roe,” to find her daughter as part of a publicity stunt when McCorney began trying to earn money as a pro-choice speaker.

Thornton, who was raised to oppose abortion, said she took the news badly and that the only thing she knew about the case or her birth mother at the time was that McCorvey “had made it okay for people to go out and be promiscuous,” though her view has changed over time, she said.

She said she’s been pressured for years by both anti-abortion and pro-choice advocates to join their respective causes but says that she doesn’t identify with either label, adding that while she chose not to terminate an unplanned pregnancy at age 20, she doesn’t understand why abortion should be a government concern.

Thornton and McCorvey had a complicated relationship and never met in person before McCorvey died in Texas in 2017, Thornton said, citing her birth mother’s wish to use their relationship to generate publicity, which ran against Thornton’s hope for a private life.

Thornton later changed her mind, saying she was tired of keeping the secret of her ties to Roe v. Wade and the hold it had on her life, and explaining it caused her a lot of anxiety and made her afraid to pursue friendships over fear of being found out.

“Secrets and lies are, like, the two worst things in the whole world,” Thornton told Prager the first time they met in 2012. “I’m keeping a secret, but I hate it.”

Thorton revealed her identity amid a new push against abortion led by Texas, the same state where Roe v. Wade originated. In May, Texas Gov. Greg Abbott signed into law a bill that effectively bans abortion at six weeks, before many find out they’re pregnant. To enforce the law, private citizens will be able to sue anyone who helped secure an abortion in civil court for up to $10,000. The law will make 85% of abortions performed in the state illegal, experts say. The legislation took effect last week after the Supreme Court declined to block the law in a 5-4 vote, though the issue could come back to the court in the future. Republicans in Florida have indicated they plan to introduce a similar bill.

The landmark Roe V. Wade case issued its ruling on abortion in 1973, three years after McCorvey, then a waitress in Dallas, sued Texas officials in order to terminate her pregnancy. Thorton’s adoption was arranged by Dallas attorney Henry Mc­Cluskey, who introduced McCorvey to Sarah Weddington and Linda Coffee, the two lawyers who were looking for a plaintiff to challenge Texas’ abortion law and later filed a lawsuit on McCorvey’s behalf and argued in front of the Supreme Court. McCorvey has a complicated legacy on both sides of the abortion debate. She first worked as a pro-choice advocate before switching sides in 1995 after becoming a born-again Christian. McCorvey earned nearly $500,000 from anti-abortion groups, according to AKA Jane Roe, a documentary released last year. However, shortly before her death in 2017, McCorvey told filmmakers she had never been against abortion at all: “If a young woman wants to have an abortion, that’s no skin off my ass. That’s why they call it choice,” McCorvey said, adding that she “took their money and they’d put me out in front of the cameras and tell me what to say … it was all an act.”

McCorvey’s oldest daughter Melissa Mills, who like her two half-sisters was adopted, spoke to CBS News for an interview that will air Friday. In clips released Thursday, Melissa said their mother never had an abortion and was largely left out of the Roe v. Wade push, saying McCorvey did not present as ”the type of person they needed.”