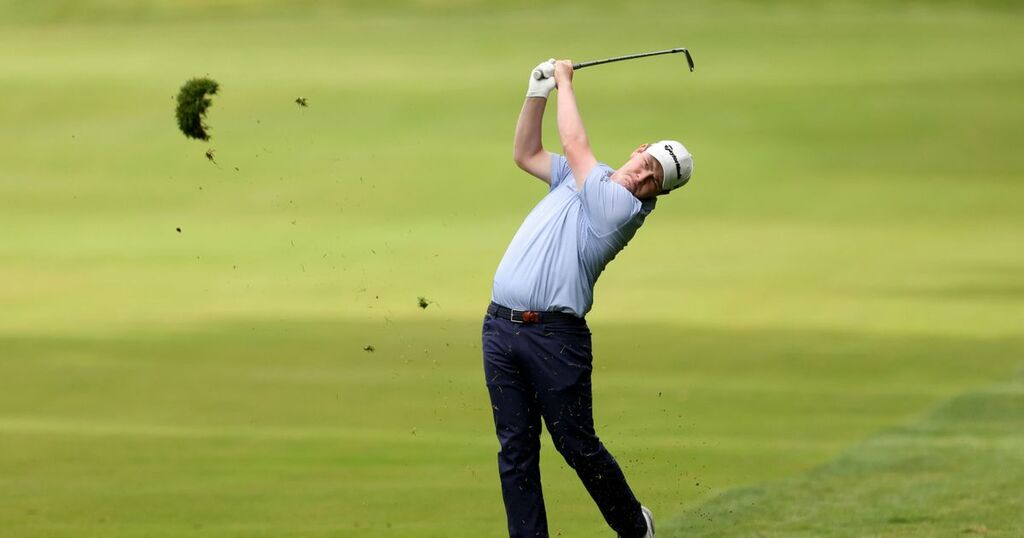 Robert MacIntyre was proud of his mum Carol after her emergency actions comforted a stricken spectator at Wentworth.

The Oban ace was close to a harrowing incident which halted day one play at the BMW PGA Championship for 25 minutes.

MacIntyre and playing partners Graeme McDowell and Alex Noren were halted by worried officials on their very first green after a gentleman collapsed and lay prostrate just yards away.

Tournament chiefs immediately understood the seriousness of the situation and urgently called for medical staff to rush to the scene.

Before the ambulance crews arrived, it was MacIntyre’s mother who reacted instantly to cradle and care for the man who had lost consciousness.

She continued to comfort and cool the individual before he was taken to nearby St Peter’s Hospital in an ambulance which sped off the grounds below the second green with a police motorcycle escort as the Scot looked down from the putting surface.

MacIntyre wasn’t surprised to see his mum rush to aid and said: “That’s the way I’ve been brought up. If I was in that position, I’d have been there trying to help. Hopefully the guy is alright.

“I could see it was her cradling the guy.

“She knows what she’s doing. She’s done nursing stuff. She’s a jack of all trades.

“She’s cared for so many older folk and, yip, she would have done that for her worst enemy if it came to it. She’s one of those people.

“As soon as it happened, I saw her there. But, thankfully, people gave them time and space and respected what was going on and we also did that.

“Sometimes I get on at her for doing too much for folk, but, in a situation like that, if someone is on hand, then great.

“She’s not a doctor or can diagnose something straight away, but she knows the basics and she knew to cool the guy down.

“I was watching what she was doing, but there were more people than just her there to help. She’s some machine is Carol Mac.

“It wasn’t nice, but we took our time and let everyone deal with what was there. I think another woman went down on the other side.

“I saw the ambulance rushing away when we were on the second green.”

MacIntyre made a birdie on that second green after the ambulance departed, but immediately bogeyed the third and was left almost speechless at carding a two-over-par 74.

The Scot needs to win at Wentworth to qualify for the Ryder Cup and was partnered alongside vice-captain Graeme McDowell, but it just didn’t happen on day one.

MacIntyre said: “I’ve just not got it just now. Golf is beating me up at the moment, but I’ll get my time to beat it up soon.

“It sums up the way I am playing. Fifteen greens in regulation, I’m putting beautifully and I’m two-over par.

“I’m hitting it far too far away from holes. I can’t say the word to describe it just now.

“I’m playing good. I’ve got control of the ball. I hit one bad tee shot on the 17th. I’m just not hitting it close enough and it’s driving me insane.

“Even on the last. I’ve hit a good tee-shot. Two-iron in my hand and I have wiped it left. It’s the way the course is set up. You can’t guarantee the contact on the ball .

“It was high in the rough and I have the high toes in there for a reason. So I don’t go underneath it and I clipped the top groove. It’s what makes it such a good course.

“I just want to be fighting for tournaments and just now I’m fighting to make cuts and that’s not where I want to be.

"I want to be in there come Sunday and now it’s just no fun.”