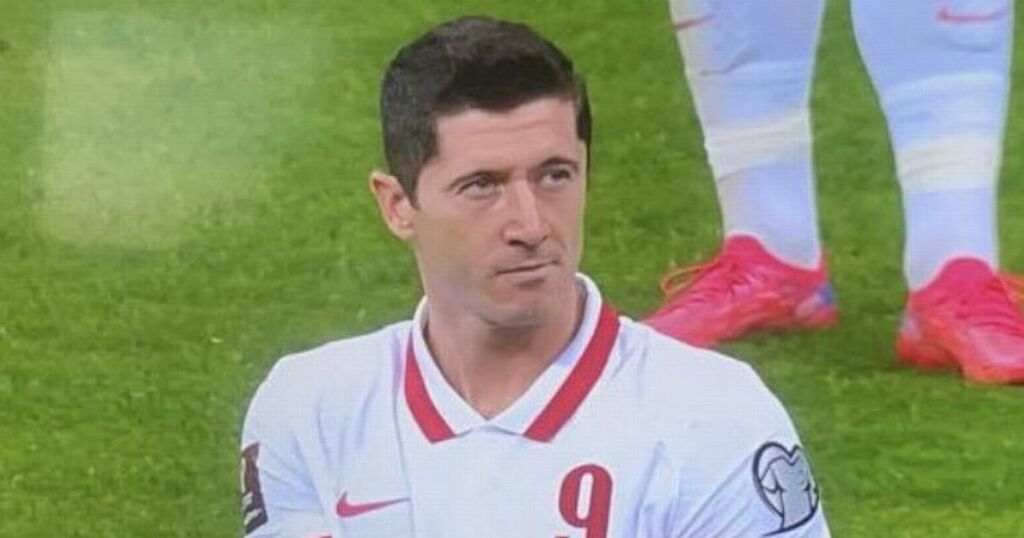 Poland captain Robert Lewandowski showed his support for England's players as they were booed while taking the knee ahead of Wednesday night's World Cup qualifier.

The Three Lions have promoted racial equality with the gesture over the last year, but they have often been met with boos and whistles while taking the knee.

They were jeered in Hungary last Thursday and there was a hostile atmosphere in Warsaw when England players and staff kneeled at the National Stadium.

Poland did not join England in taking the knee, but Lewandowski backed up the message of Gareth Southgate's side with his own gesture.

The Bayern Munich striker was seen pointing to the respect badge on his shirt sleeve in the moments before kick-off.

England's players are resolved to continuing to take the knee despite the negative response they have received - even from their own fans on occasion.

The Three Lions were booed at the Riverside Stadium ahead of a Euro 2020 warm-up game in June, but the tireless work of Southgate and his players is changing attitudes to the gesture.

"I just know that us as a group know we’ll carry on taking the knee because it’s important for us, important for our country and to fight racial abuse," said midfielder Kalvin Phillips last week.

"It’s hard to say we’re starting to win, but we’re going in the right direction. The boos at Middlesbrough were disappointing and heartbreaking for us, but as time went on, the more vocal we were that we were going to take the knee and support what we believe in.

What did you make of England's reception in Poland? Comment below.

"I think a lot of fans understood that and they did switch the other way and carried on cheering for us."

Meanwhile, Southgate blasted the crowd at the Ferenc Puskas Arena which relentlessly targeted his players throughout England's 4-0 victory last week.

"Everybody knows what we stand for as a team and that's completely unacceptable," he said of the racist abuse and missiles thrown by Hungary fans. "Everything has been reported to UEFA and we have to see what happens from there.

"There's no more that this group of players - and all the staff in fairness - could do in the fight against racism. We're trying to uphold our part of it and other people have got to take the right action to try and make progress."

Southgate added: "I don't think our players can do anything more than they have done in the last two or three years to get the right messages out, to take the right stands and it is for other people to protect them."