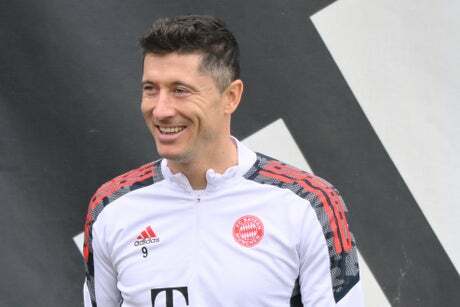 Robert Lewandowski has decided not to sign a new contract with Bayern Munich, multiple reports claim.

The 33-year-old has turned down the long-awaited offer of a new deal at the Allianz Arena amid links of a summer transfer to Barcelona, who are believed to have made him their top transfer target. Lewandowski has one year remaining on his current contract, but Bayern will now have to weigh up whether to sell him in the coming months or lose him for free next summer.

Sport Bild say that the Poland captain grew angry with the German giants over their pursuit of Borussia Dortmund striker Erling Haaland as a long-term replacement. Haaland has instead chosen to join Manchester City in a blockbuster transfer deal which will be worth in excess of £200million once wages and bonuses are paid.

Lewandowski had previously been coy on his future but now wants a new challenge away from Munich. Barcelona are the heavy favourites to sign him after manager Xavi Hernandez recently labelled him a "great player" and president Joan Laporta told a supporter that a move was possible.

Bayern have regularly been warned about letting the master marksman leave, following his 49-goal return this campaign which helped the club to a 10th successive Bundesliga title. But the club's chief executive, Oliver Kahn, recently claimed that Lewandowski would be staying in Bavaria ahead of next term. "We definitely have Robert with us for another season," Kahn told Amazon Prime Deutschland.

"We know what we have in him and we're relaxed about it. Apparently there's a competition out there: 'Who will tell the biggest nonsense story about Robert Lewandowski?' Talks will continue. We're not crazy and are [not] discussing the transfer of a player who scores between 30 and 40 goals with us every season."

Have your say! Where should Lewandowski go? Give us your pick in the comments section.

The man himself told Sky Germany back in March: "I am open to everything. I'm quiet. It is important for me to be able to focus on my game, always on what can happen in the last match. Everything that remains to be done regarding the contracts is a secondary issue and remains in the background."

Many held the belief that Lewandowski's uncertain future was a reason behind Bayern's poor end to the season, having gone out of the Champions League at the quarter-final stage to underdogs Villarreal. Manager Julian Nagelsmann disagrees, however, stating: "In my opinion there are too many alibis in football.

"I'm the one who needs to take the guilt, or the responsibility. It's very popular in sport to shy away from that. But I'm not going to do it. I'm not going to give someone else the blame that somehow they were at fault. But I will take my lessons in terms of tactics and everything that belongs to the game. If I don't do that then the blame definitely can't be placed on those players whose contracts haven't been finalised."