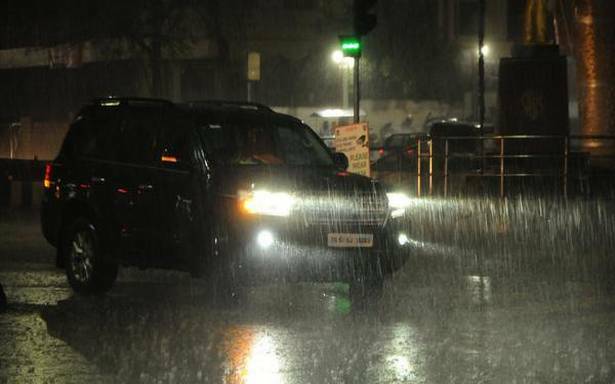 Sudden, unexpected cloudburst during evening hours caught people unawares, and flooded the city and its streets on Friday.

An otherwise hot and sultry day was rounded off with a heavy downpour, which began at around 8.30 p.m. and continued lashing various parts of the city for about an hour with unmitigated intensity.

As is wont for the city, roads soon turned into streams causing traffic blockades everywhere. Vehicles stopped mid road, and commuters had a hard time wading through water.

With the eastern part of the city hit badly, the highway near Chintalkunta was inundated, stalling the traffic between L.B. Nagar and Hayatnagar for a long time. Power cuts were rampant across the city, lasting for an hour or two.

As per the data available from the automatic weather stations across the city, Lingojiguda in Saroornagar received the maximum rainfall at 13 centimetres in an hour.

The Department of Meteorology has predicted thunderstorms accompanied with lightning at isolated places in a few districts of Telangana on Saturday.