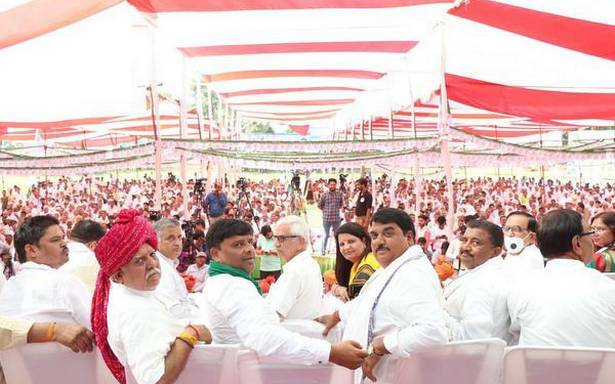 Continuing with its Dalit outreach, the Rashtriya Lok Dal (RLD) on Saturday promised a new scheme for urban labour on the lines of the Mahatma Gandhi Rural Employment Guarantee Scheme (MGNREGA) if voted to power.

Promising guaranteed income for urban labour in the unorganised sector, the announcement was made by party president Jayant Chaudhary on the occasion of the death anniversary of Kanshi Ram, who founded the Bahujan Samaj Party (BSP).

“Those working in the unorganised sector in urban areas don’t get the benefits of government schemes. In the memory of Kanshi Ramji, we are including a special scheme for the urban labour in our manifesto that will provide them a protective cover and help in their economic growth. It will be named after Kanshi Ramji and help in providing a dignified life to the urban poor,” the RLD chief said.

The announcement was made as the party concluded its Nyay Yatra with a rally in Agra. Mr. Chaudhary said Kanshi Ram gave voice to the deprived sections of society. “The young generation should be inspired to complete his unfinished goals. As part of the Nyay Yatra, RLD workers reached out to the underprivileged,” he said.

Invoking the founder of the BSP in Agra, known as the Dalit capital of Uttar Pradesh, is being seen as an attempt to reach out to bahujan vote bank. With Chandrashekhar Azad of the Azad Samaj Party showing interest in a seat-sharing arrangement with the Samajwadi Party and the RLD, the announcement’s impact will be watched in the coming days.

Prashant Kanojia, in-charge of the RLD’s SC/ST cell, appealed to public not to forget how farmers were mowed down in Lakhimpur and how Mr. Chaudhary was lathi-charged when he went to meet the family of the Hathras gangrape and murder victim. “The impact of the lathi was felt by the Dalit community,” he said.

The way this government is selling everything to private players, Mr Kanojia warned, if the BJP was voted back to power, it would do away with reservation for the SCs and STs.