Rioters Chanted “Free Novak” While Blocking What They Thought Was His Car And Hello, Irony? 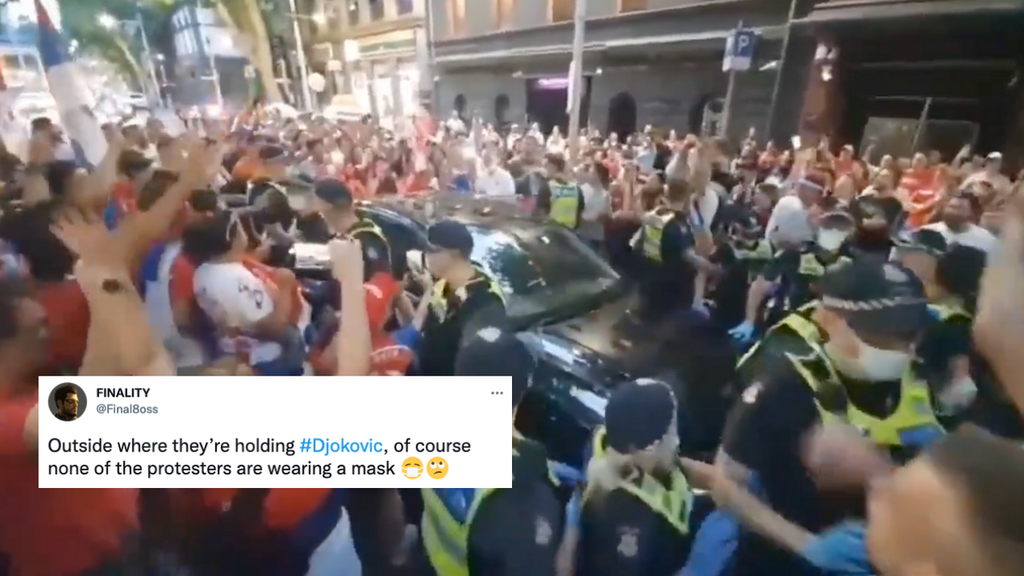 Unvaccinated tennis player Novak Djokovic has been allowed to train for the Australian Open after his deportation was overturned in federal court on Monday, and anti-vax rioters have taken to the streets to … angrily celebrate?

Last night police dispersed a crowd of Djokovic supporters that gathered outside his lawyers’ office on Melbourne’s Flinders Lane.

Officers used pepper spray on rioters and arrested a 27-year-old man, who the ABC reports is likely to be charged with assaulting police and acting in a riotous manner.

In videos posted online, the rioters appeared to be happy that Djokovic won his freedom but also furious that he was detained at all.

One Twitter supporters have called being detained for Four! Days! “disgraceful”, ignoring the refugees who have been imprisoned in indefinite detention for nine years.

The crowd followed a black sedan with tinted windows that emerged from Rialto Towers that rioters believed was transporting Djokovic.

Fans swarmed and blocked the car that was trying to leave while chanting “free Novak”. The irony is just *chef’s kiss*.

Turns out it wasn’t actually Djokovic inside, but some of his staff.

Some early footage online shows police forming a ring around the car in an attempt to keep the crowds back, though one man managed to get on top of it.

In one video, protestors push and yell at officers who kept their hands up without retaliation.

Outside where they’re holding #Djokovic, of course none of the protesters are wearing a mask ???????? pic.twitter.com/S55bOrfbRn

In another piece of footage, rioters hurled bottles at officers walking alongside the car, yelling “police state!” while following.

Police appear to spray protestors from a distance.

Victoria Police said the “aggressive behaviour of the crowd” warranted the pepper spray. Two officers received minor injuries but did not require treatment.

Obviously, none of the rioters can be seen wearing masks.

Djokovic was training in Melbourne today after his release from the Park Hotel immigration detention facility, but his Aus Open fate still hangs in the balance just six days before the tournament starts.

Immigration Minister Alex Hawke still has the power to choose to cancel his visa regardless of the court’s verdict — something Scott Morrison flagged was a possibility but is yet to decide on.

The post Rioters Chanted “Free Novak” While Blocking What They Thought Was His Car And Hello, Irony? appeared first on Pedestrian TV.