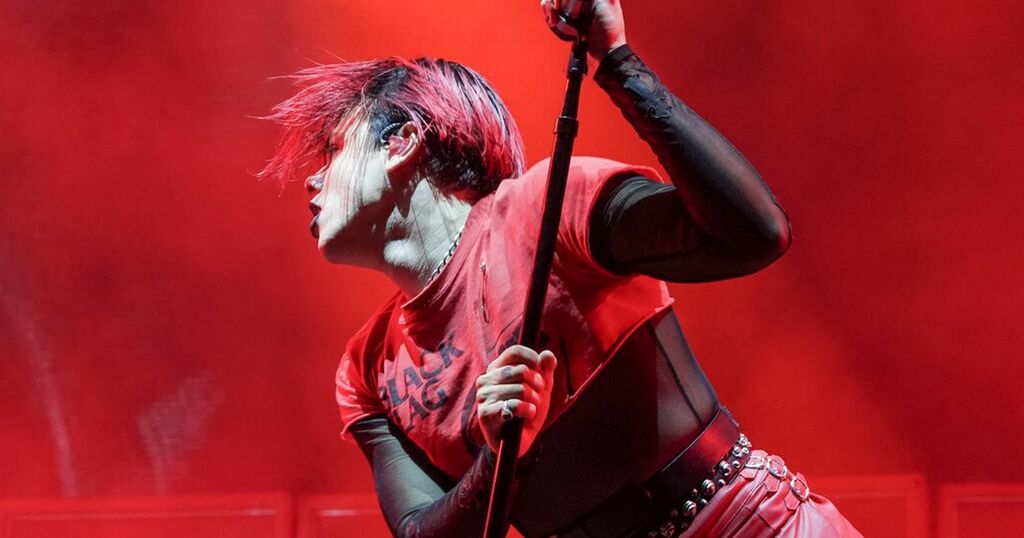 A snarling, red-lipped mouth, projected onto a black curtain. A thick Doncaster accent. A roar of 'make some f***ing noise' piped over the tannoy.

And then the curtain falls and a red blur flies across the stage, almost cartoon-like. This is Yungblud, a musician with a bottomless pit of energy reserves and a die-hard following of fans who call themselves the Black Hearts Club (or Black 'arts Club, in his accent).

Dressed in a red jumpsuit, tied around his waist, he blasts through Strawberry Lipstick before standing, arms clasped behind his back, maniacally grinning at his followers.

He was full of beans when he headlined Manchester Pride, but his gig at the O2 Victoria Warehouse is a whole new level of lively.

There are moments where the mosh pit grows so large it spans the entire venue, squeezing people into the very corners of the floor before they ping back together.

It's a gig that needs a Seaworld-style Splash Zone, so frequently does he take one swig of bottled water before flinging the rest over the crowd.

Yungblud is a rising punk star and he encourages all the moshing, thrashing and jumping that comes with a punk rock gig.

While orchestrating his audience, he shouts: "If you wanna get in the pit get in the middle, if you don't, get out the way, because you might die."

But he's considerate too, chasing that sentiment with: "Look after each other out there, we're a family. If anyone goes down, you pick them right back up again."

The 24-year-old certainly views his 3,500-strong audience as his family, stressing how much he loves each and every adoring fan before him.

His impassioned speeches about equality and identity and acceptance weren't put on for the sake of Pride - these are the core values of the Yungblud enterprise and he's keen to remind his audience that this is a safe - if rowdy - space.

It's a message that is clearest in songs like Love Song, Loner and Parents.

The ska-like undercurrents of I Love You, Will You Marry Me - a song written about the north of England - sees Yungblud turn the lights on the audience while he continues to spring back and forth across the stage like a caged animal.

With this much vigour, I have no doubt that he could dominate a stadium-style stage, running laps of the Etihad without pausing for breath, and suspect we'll see him stretching his legs at far bigger venues within the next few years.

Yungblud is shaping up to be very loud, powerful voice for the next generation of adults.