Review: Dealing torture and guilt in 'The Card Counter' 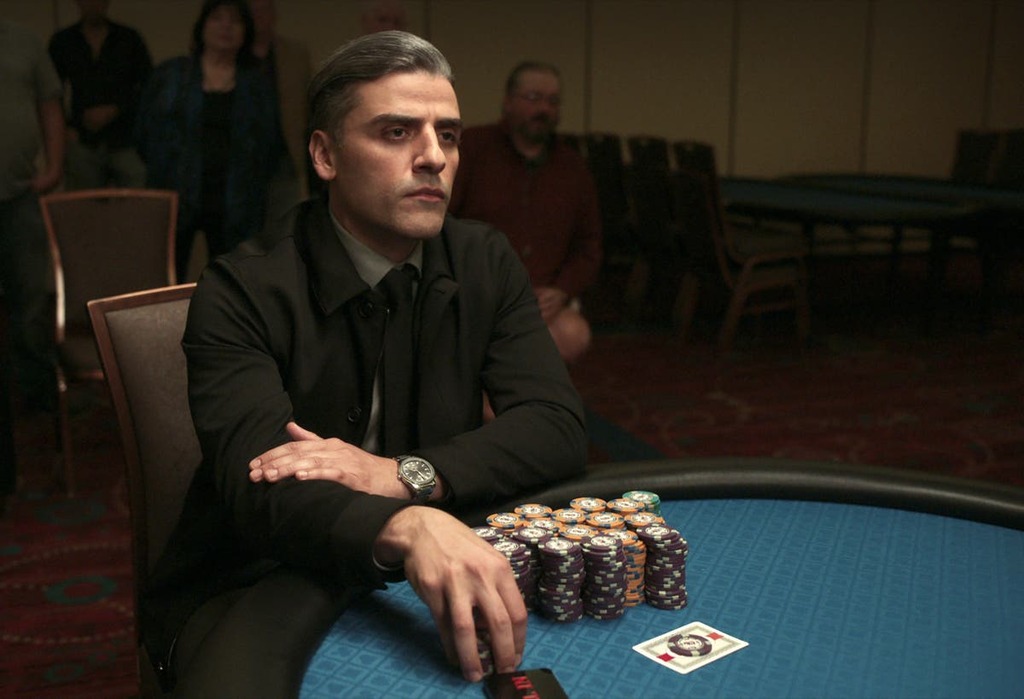 But writer-director Paul Schrader has for some time known his cards, playing variations of the same hand over and over again. The protagonist of his “The Card Counter” — William Tell (Oscar Isaac) — is the latest in a long line of Schrader’s tortured, self-hating, deeply habitual, solitary men going back to Travis Bickle in “Taxi Driver.”

This repeating figure of Schrader's — one also seen in his previous film, “First Reformed ” and in another he wrote for Martin Scorsese, “Bringing Out the Dead” — has never seemed like a rerun. It’s more like a spiritual condition that Schrader, raised a Calvinist, can’t rid himself of. In making film after film suffused with remorse and isolation, Schrader’s project takes on autobiographical, ritualistic dimensions.

So narrates Tell in the opening moments of “The Card Counter,” which arrives in theaters Friday. He’s in prison, quite contentedly. There he reads Aurelius, studies card playing and writes in a journal. He has grown accustomed to confinement.

And once released, his life is hardly any less restricted. He travels to casinos, speaking little and using his analytic know-how to reliably win at blackjack — but never too much to arise suspicion. In his motel rooms he covers everything in sheets — the lamp, chairs, tables — carefully tying them down with twine.

Those knots feel like an echo of Schrader's “First Reformed,” with Ethan Hawke as a tormented priest. That movie concluded, memorably, with Rev. Toller wrapping barbed wire around himself. In “The Card Counter,” nothing gruesome seems near the film's lifeless interiors. But the film's intense quietude and its central character's heavy gravity radiate something ominous. Such a regimented, restrained life is inevitably going to be released. The taut strings will break. Violence (surely) and redemption (maybe) will follow.

Tell is a heightened kind of character — a deadpan noir archetype who mostly expresses himself through the film's narration. But for a movie with moody monologues, it's oddly unstylized in its drab look. Sometimes, “The Card Counter” risks mistaking airlessness for minimalism.

Tell's rhythms are disrupted when he encounters a young man named Cirk (Tye Sheridan a more natural presence), the son of a soldier who served years before with Tell. They meet at a presentation Tell wanders into by John Gordo (Willem Dafoe), a retired major now instructing police departments on interrogation techniques. Tell, we learn, served under Gordo at Abu Ghraib. Disorienting, horrifying flashbacks follow. And the cool veneer of “The Card Counter” snaps open with an unspeakable past.

Cirk wants revenge and tries to draw Tell into his scheme. Tell can no longer deny to himself his hidden demons. Recalling his proficiency at carrying out Gordo's directions he writes: “I had it in me. I had the right stuff.” Believing he can steer Cirk away from his bound-to-fail plot to torture and kill Gordo, Tell takes him under his wing, and signs up with a gambling backer, La Linda (Tiffany Haddish), to raise a nest egg for Cirk. She places him into poker tournaments, taking a cut of the winnings, where Tell faces off frequently with a “U-S-A”-chanting poker star and a walking metaphor for blind patriotism.

There is a lot that's a little awkward about how all this works. The dialogue is sometimes clunky. Haddish, gamely trying her most dramatic role, doesn't quite fit in. But, then again, many of the parts of “The Card Counter” don't quite fit. Toggling between Texas Hold 'Em and Iraq War nightmares makes for a head-spinning collision.

But I think the incongruities of “The Card Counter” also give it its power. Schrader's film is so self-evidently the impassioned work of a singularly feverish mind that its flaws add to its humanity. The atrocities and shame of Abu Ghraib should come back as a piercing interruption. In Isaac's masterful performance, the deep-seated guilt of the Schrader protagonist takes on national proportions. Some elements may be out of balance in “The Card Counter,” but its morality isn't.

“The Card Counter,” a Focus Features release, is rated R by the Motion Picture Association of America for some disturbing violence, graphic nudity, language and brief sexuality. Running time: 112 minutes. Three stars out of four.