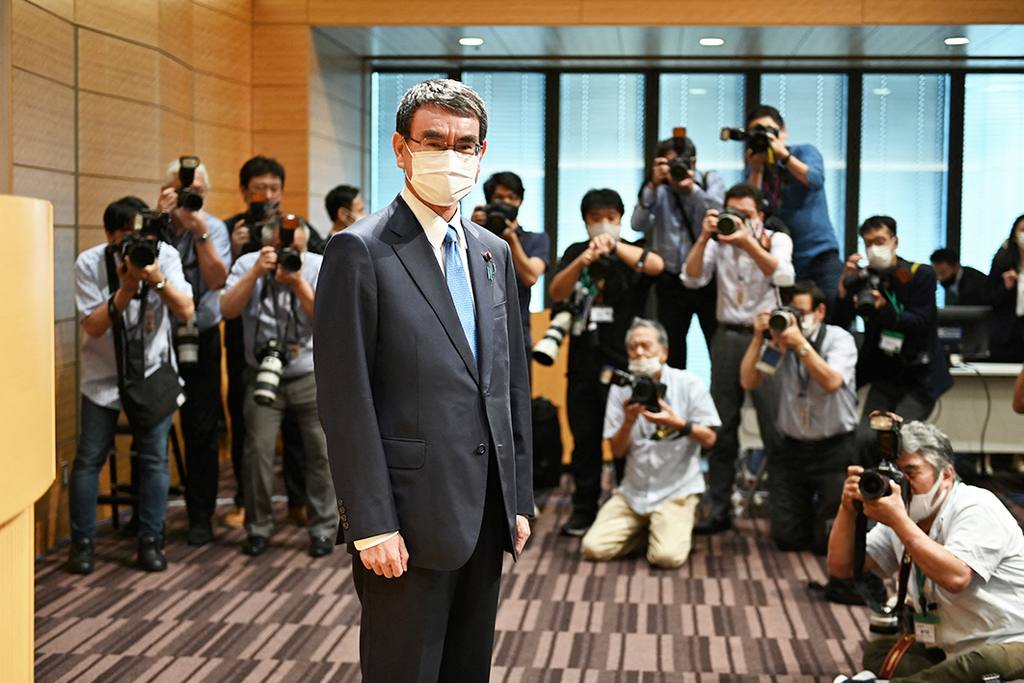 The first leaders’ summit of what’s known as Quad 2.0 — the revived grouping of the United States, Japan, India and Australia that aims to counterbalance China — is already shaping as an ill-timed affair.

Let’s leave aside the doubts about US staying power after Joe Biden’s withdrawal from Afghanistan. Or Narendra Modi’s latest subversion of democratic freedoms revealed by the discovery of Israeli spyware in the phones of 300 critics. Or even Scott Morrison’s spell in Washington’s doghouse because of foot-dragging on climate change.

Principally, the timing is bad because the Japanese prime minister, Yoshihide Suga, will be in his last days in office when the meeting takes place in Washington on 24 September. He will step down less than a week later to hand over to a successor to be chosen by the ruling Liberal Democratic Party on 29 September.

When Shinzo Abe stepped down as prime minister in August 2020, citing a recurrence of stomach ulcers, Suga, now seventy-two, looked like a safe choice as successor. As Abe’s chief cabinet secretary he appeared to have been the brains and safe hands of the government, steadily implementing Abe’s retro-nationalist agenda while protecting him from successive scandals over political favours.

That reputation, which drew a 70 per cent approval rating in opinion polls when he stepped up, has now dissipated, largely thanks to Suga’s handing of the Covid pandemic.

In a not-unfamiliar picture for Australians, his government was slow to grasp the urgency of the vaccine rollout. Its health ministry insisted that Pfizer retest its vaccine in Japan, losing several weeks, even though the US trials had included people of Japanese origin. (The ministry said this didn’t count, as they wouldn’t have been eating Japanese food.) The Japan Medical Association, a powerful political donor, convinced Suga that local doctors were the best placed to give jabs. Many older people couldn’t make appointments because the smartphone app was too complicated.

Then Suga took a gamble on holding the summer Olympics despite the Delta variant’s resurgence and, with Japan’s vaccination level then just 23 per cent, amid fears the athletes could set off new outbreaks. Watching on TV, the Japanese were told hospitals were reserved for Olympians while they would have to endure Covid at home, except in the most severe cases.

A belated vaccination effort, in which the doctors’ lobby was pushed aside and the Jieitai (military) brought in to set up mass vaccination centres, has pushed the double-dose level among adults above 50 per cent, but the political damage was done.

In August, backed by three centrist and left-wing opposition parties, a university professor with expertise in pandemic analysis beat the Liberal Democrat candidate in elections for mayor of Yokohama. The port city near Tokyo is capital of Kanazawa prefecture, Suga’s political home ground.

With his approval rating below 30 per cent, and with younger and less-established Liberal Democrat members of the Diet worried about the House of Representatives election due by 28 November, no one was taking up Suga’s idea of a snap election or a cabinet reshuffle. Suga announced he wouldn’t be running in the party leadership ballot due at the end of this month.

The contest — a mix of public campaigning and the kind of backroom brokerage among the party’s seven factions that Yukio Mishima portrayed in his novel After the Banquet — has a half-dozen declared and potential candidates.

Among them, and the most popular with the public, if not his colleagues, is former defence and foreign minister Taro Kono, who at fifty-eight rates as a youngster among Liberal Democrats. Most recently, as Suga’s minister for administrative reform, he famously suggested Japan’s civil service might move on from letters and fax machines to fully digital communications. Although he was also in charge of the vaccine rollout, he seems to have gained credit for the recent progress rather than the earlier delays, which have been sheeted home to Suga.

With 2.5 million in his Japanese-language Twitter circle, Kono is more skilled than most of his colleagues in reaching the public. He has vowed to press on with reforms, and has moderated his anti-nuclear position by conceding that power stations shut down after the Fukushima disaster might be used again while Japan phases out coal, oil and natural gas to reach carbon neutrality by 2050. Asked about his volatile temperament, he said he would be a leader who “laughs and cries together” with the Japanese people.

He would also be a very presentable face for Japan in the Quad and in the wider world. He opted to study at Washington’s Georgetown University rather than one of the elite Japanese universities that prepare the young for top political, bureaucratic and business circles. He is versed in the big diplomatic and strategic issues from his previous portfolios, and as far as the Quad goes, supports closer military ties with the United States and its allies, even angling for Japanese membership of the Five Eyes intelligence-sharing pact.

As importantly, he brings greater nuance and empathy to Japan’s troubled history with its East Asian neighbours. A third-generation Liberal Democrat, he is the son of Yohei Kono, who in 1993, as chief cabinet secretary, issued a statement officially recognising that so-called comfort women were put into sexual slavery for the Imperial Japanese Army in wartime.

The “Kono statement” was a step towards dealing with this historical abuse, but the contrition was wound back when Liberal Democrat politicians on Shinzo Abe’s side of the party claimed that army brothels were simply commercial businesses and their workers all volunteers. The controversy has given a bitter edge to relations between Japan and South Korea, the two most powerful US allies in the region.

As Daisuke Akimoto of Temple University, Japan writes in the Diplomat, “It is possible to theorise that Kono has long waited to become prime minister in order to follow his father’s diplomatic footsteps, with a view to promoting Japan’s reconciliation diplomacy in the Asia-Pacific region.” But Kono, perhaps with an eye on his party colleagues, hasn’t played up this aspect of his legacy yet.

What he has said is that, as prime minister, he wouldn’t be visiting the Yasukuni shrine, the Shinto memorial to Japan’s war dead. Because it pays homage to Pacific war leaders executed by the Allies for war crimes, as well as ordinary soldiery, and because its museum portrays Japan’s pre-1945 campaigns as well-intentioned, political visits to Yasukuni are seen elsewhere in Asia as excusing aggression.

All of which makes Kono somewhat suspect in the eyes of the party’s retro-nationalists, with terms like “maverick” expressing this sentiment.

Kono’s closest rivals look like being former foreign minister Fumio Kishida, sixty-two, a figure who has long hovered near the top of the party and who declared his candidacy early, and Shigeru Ishiba, sixty-four, a former defence minister who is yet to decide whether to run. Either would be a business-as-usual prime minister but hardly likely to jolt Japan out of its longstanding economic and social ennui.

The wildcard candidate is Sanae Takaichi, sixty, who would be Japan’s first female prime minister but hardly a standard-bearer for feminism. She has opposed steps to break down the nation’s patriarchies, including allowing married women to keep their own family name and introducing female succession to the imperial throne. “She belongs to a kind of Japanese woman who gets ahead by being more macho than her male colleagues,” says Andrew Horvat, a Canadian academic long resident in Tokyo.

Early in her career, Takaichi worked as an intern for a Democratic congressman in Washington and played drums in a rock band. Since then she’s marched to a different drum. Nurtured in her home city of Nara by a notorious war-guilt denialist, one-time justice minister Seisuke Okuno, Takaichi belongs to Nippon Kaigi and Jinja Honjo, organisations intent on returning Japan’s politics and society to their pre-1945 state and restoring the emperor’s semi-divine status. As a minister she has visited the Yasukuni shrine many times.

An ally of Shinzo Abe and his brother, defence minister Nobuo Kishi, Takaichi is among those in the Liberal Democrat camp who promote closer relations with Taiwan. Taken over by Japan in 1895 as part of the settlement of a war with imperial China, the island has long been seen in Japan as the success story of Japanese colonialism, in contrast to the later annexation of Korea. Supporting Taiwan is part of standing up to China, with US bases in Japan key to its defence. For the first time, Tokyo’s latest defence white paper declared “peace and security in the Taiwan Strait” as a priority, a warning to Beijing that also crept into the communiqué from this year’s Australia–Japan meeting of foreign affairs and defence ministers.

As she began her run for the leadership, Takaichi called for amendment of Japan’s post-1945 constitution to transform the Jieitai from its circumscribed role in defence of Japan to a “national defence force” able to strike out, including by launching pre-emptive attacks on missile bases in places like North Korea.

The puzzle about her candidacy is that it has been openly backed by Shinzo Abe himself. With only 4 per cent approval in the polls, Takaichi is a very long shot. If Abe is seeking cover against prosecution for his latest scandal — some ¥23 million (A$285,000) spent from covert funds during 2015–20 to bring constituents to the prime minister’s annual cherry-blossom viewing party — this surely could be obtained from a more popular candidate. Or possibly Takaichi is a stalking horse for an attempted return by Abe himself, who at sixty-six is aged midway between Suga and the present line-up.

A later date for the Quad meeting might have been advisable. •

The publication of this article was supported by a grant from the Judith Neilson Institute for Journalism and Ideas.

The post Retro-nationalism’s vanquisher? appeared first on Inside Story.