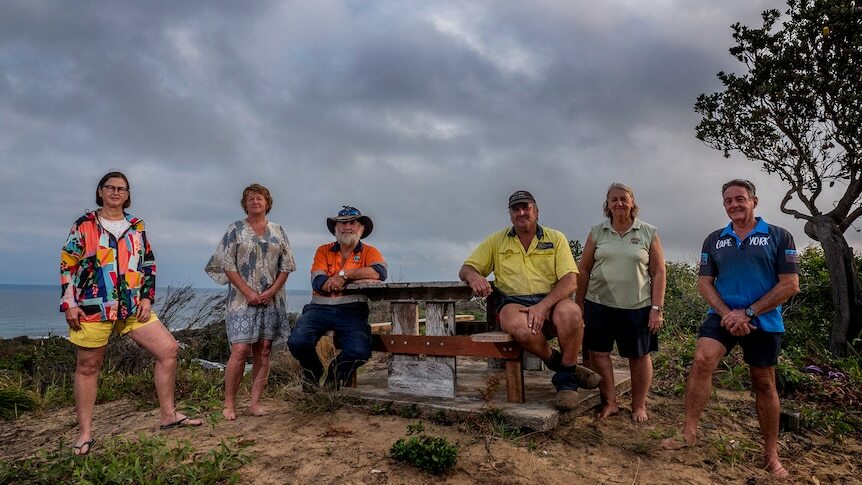 Standing on a ridge above Happy Valley on K’gari (Fraser Island), a group of residents is brought to tears, remembering the battle how they fought together to save their township from the 'Happy Monday' fire.

It was the most devastating bushfire on the World Heritage-listed island in recorded history, burning 87,000 hectares of land.

But for the community of Happy Valley there is a silver lining.

The bushfire was started by an illegal campfire near Orchid Beach on October 14 last year and went on to burn for two months.

Happy Valley came under direct threat, with residents watching on as five-metre-high flames travelled over the ridge above the town.

The volunteers marched into the fire ground and fought hours on end to save their homes, with the assistance of water bombing aircraft and Queensland Fire and Emergency Service personnel.

The landscape has returned to its former glory, barring the few scorched tree trunks that stand out like pockmarks in the greenery.

The psychological scars are taking longer to heal.

“It was a horrendous day that people will remember for a long while,” Winston Williams said.

Glenda Williams was at the blaze as a firefighter carting water, but also as a peer support officer for the community.

She recalled the “frightening” memories.

The community now celebrates the day it defeated the 'Happy Monday Fire'.

Elspeth Murray said the Happy Valley Community Association formed a few years ago to work with government, Butchulla traditional owners, and other groups on the island to work on fire mitigation.

“The community group was invaluable when the fires came,” she said.

Rhonda Matchett said the town had never felt so strong in its 100 year history.

“It took a disaster to bring us together. I’ve never been in a community like this before in my life …  everyone’s got someone,” she said.

"Not only are they glued together, but they're better prepared to stand together and defend if they need," Winston Williams said.

"Without a doubt we’re much more prepared and we have more resilient fire brigades."

The response to the bushfire was mired in controversy, with internal documents revealing the Queensland Parks and Wildlife Service (QPWS) rejected an initial offer to waterbomb the fire early on.

David Hay, General Manager of Kingfisher Bay Resort, said staff had since worked closely with the QPWS to ensure the area around the resort remained safe.

“It’s a World Heritage site so we have a responsibility as a community to make sure that it’s here for future generations and that’s a really serious obligation that we need to take on,” Mr Hay said.

The Happy Valley Rural Fire Brigade has been conducting hazard reduction and backburning in recent weeks where there's a risk of bushfires being sparked by lightning strikes.

"We're now working on country in the middle of the township which has been a little bit of a bug bear to us, it’s a high-risk area with fairly high fuel loads," Mr Williams said.

Mr Williams said he was also helping the township of Eurong put together a plan to protect it from wildfires.