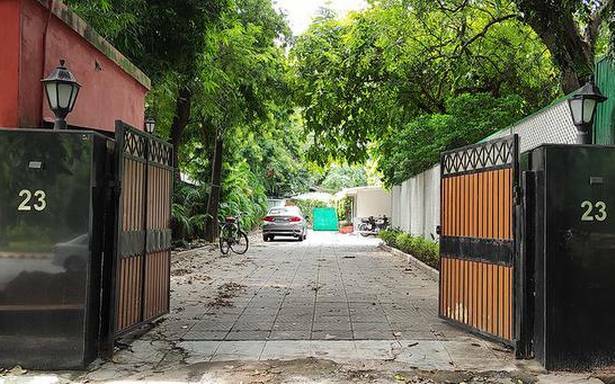 After the Cabinet reshuffle and expansion in July and the passing away of some Members of Parliament due to COVID-19 and other reasons over the past year, the address book for Lutyens’ Delhi is set for a re-jig.

Not only are some of the government-allotted bungalows for MPs and Ministers seeing new occupants, the houses that had become hubs for political parties over the years are likely to see a changing of guard.

Late Congress leader and Rajya Sabha MP Ahmed Patel’s former residence at 23 Mother Teresa Crescent, which had been a hub for Congress leaders and potential allies for decades, is getting ready to welcome new residents soon. The address that had once determined the fate of many a powerful Congress leader and been witness to forging of political alliances stood empty this week, apart from groups of workers taking out plants and bringing in materials to start renovation. The house has been allotted to Minister of State for Communications Devusinh Chauhan, according to Housing and Urban Affairs (HUA) Ministry sources.

Following Patel’s death in November 2020, a month after he contracted COVID-19, his family moved out this year. On September 6, his son, Faisal Patel, said in a tweet: “We moved out officially! Will miss 23 mother Teresa crescent- arguably one of the Most powerful addresses in modern mad india! (sic).”

Other high-profile addresses that have served as hubs for political parties for decades have been allotted to new residents, but remain occupied by the earlier allottees.

At 12 Janpath, which had been the residence of Union Minister and Lok Janshakti Party founder Ram Vilas Paswan for over three decades until his death in October 2020, hoardings with images of his son and Lok Sabha MP Chirag Paswan still greet visitors and passersby. Inside, a bust of the late LJP leader has been recently installed by supporters. This is despite the house being allotted to newly inducted Railways Minister Ashwini Vaishnaw, a HUA Ministry official said.

A source in the Ministry said Paswan’s family, including Mr. Chirag Paswan, were still residing at the address despite being issued a notice of eviction.

Former MP and founding leader of the Janata Dal (United) Sharad Yadav’s long-term residence, 7 Tughlak Road, had been allotted to newly inducted Minister Pashupati Kumar Paras, who is Mr. Chirag Paswan’s uncle, according to Ministry officials. However, Mr. Yadav told The Hindu on Wednesday that he had not received any notice to leave the house he has lived in since 2000. After Mr. Yadav was disqualified from the Rajya Sabha under the anti-defection law in 2017, he had challenged the disqualification and sought to keep his government-allotted house and salary. The Supreme Court had in 2018 allowed him to keep the house. Citing the matter, Mr. Yadav said: “There is a court case pending. They [HUA Ministry] must have made a clerical error [in allotting the house to Mr. Paras].”