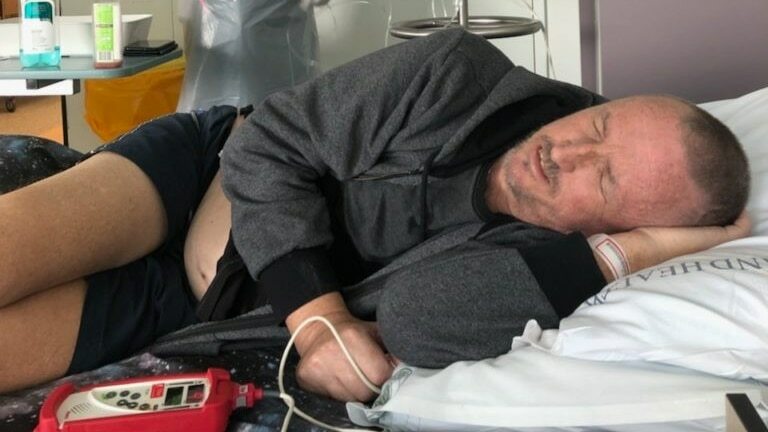 David White felt like a million mosquitoes were biting his face.

The 52-year-old sculptor from Nanango was being treated for acute myeloid leukaemia (AML), a form of bone cancer.

He recalls lying in his bed at the Royal Brisbane Hospital in the middle of the night, crying because the itch was intense.

He later learned the sensation was one of the harmful side effects that can follow a bone marrow transplant and was caused by some of the donor cells attacking his healthy tissues.

The first 100 days after a transplant are the acute stage, during which patients can have adverse immune responses to the new blood cells introduced to their system.

Known as GVHD — graft-versus-host disease — the condition affects around 70 per cent of transplant recipients in those first few months post treatment.

Still more work to be done

These are statistics Siok Tey is intent on changing.

The clinician and researcher at QIMR Berghofer Medical Research Institute and Royal Brisbane and Women's Hospital said bone marrow transplants were a key plank in the treatment of blood cancers.

There was, however, more work to be done to boost the survival and quality of life for patients, she added.

"Every year, around 18,000 Australians are diagnosed with blood cancers.

"Around 700 receive a bone marrow transplant from a healthy donor for treatment, and around two-thirds will do well.

"But we still have patients who have a relapse of their leukaemia despite the transplant, and others who experience significant complications that can either shorten their lives or have a major impact on their quality of life.

Dr Tey recently received one of the two Metcalf Prizes awarded each year by the National Stem Cell Foundation of Australia.

Worth $55,000, she will use the money to further her research into why new blood cells sometimes begin to attack the recipient's healthy tissue after a bone marrow transfusion.

"When we do a bone marrow transplant, we give patients a mixed bag of cells," she said.

"Some cells are good and help to rebuild the immune system and fight cancer cells, but other cells recognise healthy tissues in the patient as foreign and they'll try to attack and cause damage and complications."

She is working on ways to identify the bad cells before they are transplanted and either have them removed, turned into cancer killers, or program them to self-destruct if they cause harm.

Other parts of the body affected

Mr White, who is one of Dr Tey's patients, was able to ease the pain in his face with anti-inflammatory drugs.

"The one I've had for about two years now is GVHD of the mouth," he said.

But he realises GVHD is something he will just have to learn to live with for now.

"It's just become part of my life now," he said.

"It's bearable. I just have to stay away from pepper and curry."