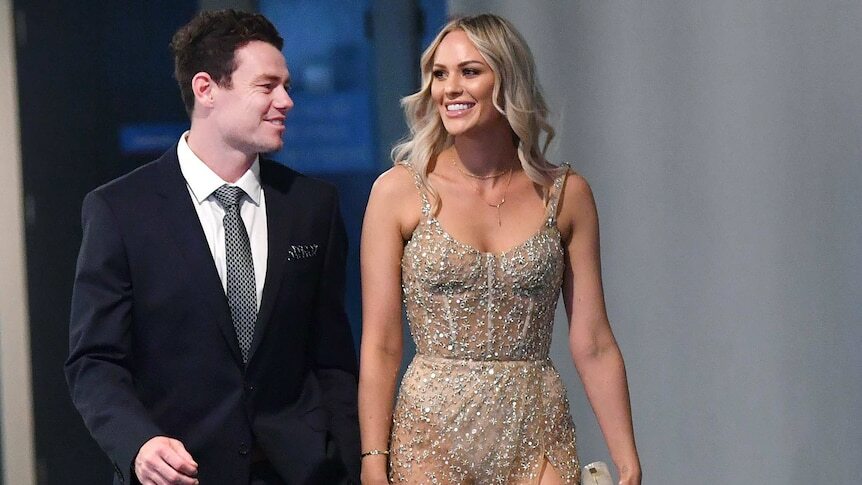 Reports that Brisbane Lions star Lachie Neale has effectively packed his bags for a flight back to Fremantle are "five steps ahead of reality", according to his father.

Robbie Neale told ABC Radio rumours of a trade request from the 2020 Brownlow medallist had been blown out of proportion by some overzealous media outlets.

He said his son had only just started speaking to his management about a potential move back to Western Australia and the Fremantle Dockers, with wife Julie eight months pregnant with their first child.

The Lions said on Tuesday that no trade request had been made.

"He hasn't requested a trade. The disappointing thing was that it hit the media and it's gone into meltdown the last couple of days," Robbie Neale told ABC North & West SA.

"The reality is it's purely a discussion that was had internally.

"They just need a bit of support because it's been bordering on horrific.

"They've got paparazzi following them around and camped outside their house, and this is not how it should have been.

"This is a bit like there's a bushfire happening, but as far as we're concerned the match isn't even out of the box."

After the initial discussions about a potential move, Neale's management company sounded out Fremantle, where he played the first seven seasons of his AFL career.

"Unfortunately we think maybe that question was asked around Freo a little bit too much and someone's picked up on it," Robbie Neale said.

He spoke about the difficulties the couple had experienced living in the AFL bubble so far away from Lachie's family in South Australia and Julie's in WA.

Despite Brisbane's relative good fortune with outbreaks and lockdowns, Julie has had to live under stricter restrictions imposed by the AFL.

"It was really about just making sure she's OK," he said.

"She's been unable to get out and spend time with other people over the last couple of years, [especially] when Lachie's on the road for three weeks at a time, sometimes unexpectedly."

Neale signed a five-year contract with the Lions ahead of the 2019 season and his dad said the club has "been absolutely terrific and just gone into support mode" since the reports emerged.

Fremantle chief executive Simon Garlick also stressed "no trade request has been made" in an interview with SEN Radio, emphasising that the Neales should be allowed to have discussions about the future of their family without it becoming national news.

"With that in mind and with all parties in mind, we're loath to make any detailed comment at this point in relation to that," he told Sportsday WA.

"Clearly if it were to occur, and it's a hypothetical at this stage, it's a really exciting prospect based on the player that he is and what he's achieved so far in the game.

"But that's what it is at the moment in reality, it's a hypothetical situation."