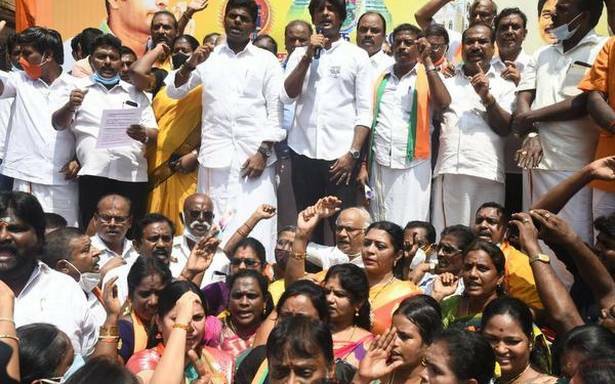 Tamil Nadu BJP president, K. Annamalai, said there would be intensified protests against the State government if it did not rollback the decision to keep temples and other places of worship closed between Fridays and Sundays, within the next 10 days.

Mr. Annamalai led a protest on Thursday outside the Kalikambal Temple in Harbour constituency. “They are trying to push their ideology into people’s personal space and our sacred temples in the name of COVID-19 control,” he said.

The BJP leader said the Central government’s advisory on places of worship to remain closed was only an advisory, and not an order. Mr. Stalin, when in the Opposition, had claimed that once the DMK was in power, the government would frame its own COVID-19 rules and not be bound by the Union government’s directive.

Mr. Annamalai also said his party would approach the Madras High Court, seeking a sitting Supreme Court or High Court judge to oversee the process of the proposal to convert temple gold into gold bars while saying that the State government cannot take such decisions.“Who makes that decision [to convert the gold into gold bars]? The trustees. Not the Chief Minister sitting in Fort St. George,” he said. Further, he claimed that as per the law that governed HR & CE, clearly the government had no control over the supervision of the daily running of temples. “There is a specific section which talks about touching temples’ gold,” he said.