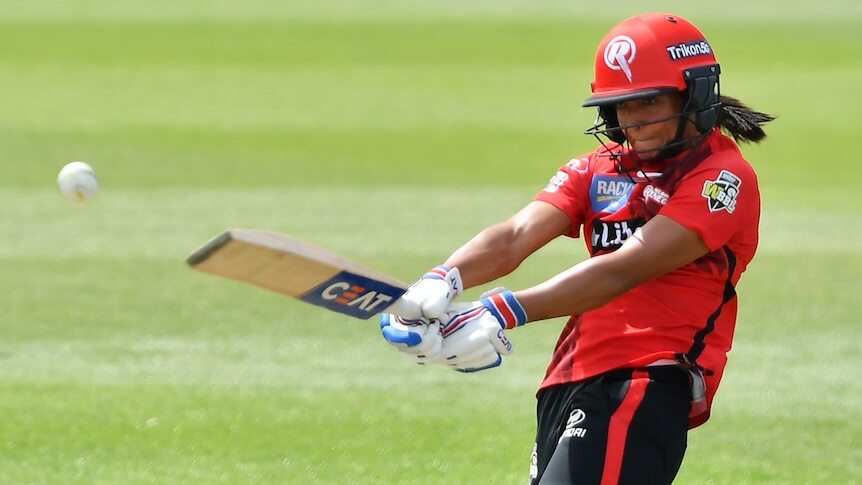 In a WBBL first, an Indian player has taken out the season's top individual gong, with T20 international captain and Melbourne Renegades star Harmanpreet Kaur voted Player of the Tournament.

Kaur had a dominant regular season in red, leading the Renegades' batting line with 399 runs alongside a club-high 15 wickets.

It's just-reward for the Indian all-rounder, who also took home Player of the Match honours three times for her game-changing contributions.

Kaur was voted as the competition's top player by the standing umpires at each match. She polled a total of 31 votes, finishing three clear of Perth Scorchers duo Beth Mooney and Sophie Devine, who each received 28 votes.

The award complements Kaur's inclusion in the WBBL Team of the Season, captained by Perth Scorchers star Sophie Devine.

"I'm extremely delighted; it's something very big that I have achieved," Kaur said.

"I'm very thankful to my team and all the support staff, they have been great during this time and have supported me a lot. It's been totally a team effort, I was just doing the job the team was requiring of me.

"We have a team that has gelled together. We support each other and that's what we have been doing ... I haven't put any extra pressure on myself, I've just enjoyed being here and supporting my teammates."

Kaur, who missed the Renegades' final regular-season match loss to the Brisbane Heat due to illness, has confirmed she's fit and ready to face the Adelaide Strikers in tonight's Challenger final at Adelaide Oval.

The winner will take on the Perth Scorchers in Saturday's final at Perth Stadium.

Sydney Thunder youngster Phoebe Litchfield has also been named the WBBL's 'Young Gun' in just her second full season in the competition.

The award is given to the best player under the age of 21 and is selected by Cricket Australia's National Selection Panel.

The 18-year-old batter juggled her NSW Higher School Certificate commitments while starring at number three for an injury-plagued Thunder side, scoring 263 runs throughout the tournament.

"It means a lot to be recognised with this award," Litchfield said. "It's a surprise, to be honest. I could think of a number of other young players who would be deserving of this award, which is really exciting for the future.

"Batting at number three was a challenge but also a great opportunity. I was very privileged that Trevor Griffin trusted me with that spot and I hope I made the most of it."