Following the Renault 5 Prototype and 5 Diamant, this exuberant new reinterpretation of the Renault 5 is an homage to the model's most iconic sports versions: the Renault 5 Turbo and Turbo 2. It owes the "3E" in its name to the fact that it follows the Turbo 2 and it's electric.

Making its public debut at the Chantilly Arts & Elegance 2022 contest on September 25, the all-electric show car is clearly influenced by the world of car racing and video games, with Renault saying it was designed for drifting.

It's obviously rear-wheel drive and strictly a two-seater, like its iconic predecessor. The rear axle houses two electric motors, each moving one wheel. Together they generate 280 kilowatts (375 horsepower) of power and 700 Newton-meters (516 pound-feet) of torque.

They draw energy from a 42-kWh lithium-ion battery pack located in the middle under the floor of the tubular chassis, which is protected by a flat base and shielded by FIA-approved roll bars.

According to Renault, the 42-kWh battery has plenty of juice for several laps on the track or a raging gymkhana. The 50-plus steering angle clearly comes in handy during drifting, allowing the electric show car to easily dodge obstacles. And after the overly enthusiastic driving takes its toll on the battery, it's good to know that topping up the pack takes two hours with a 380V/32A charger.

Should the driver want to capture their drifting antics on camera—in this day and age it didn't happen if there's no video—the R5 Turbo 3E comes equipped with 10 mounting brackets for cameras inside and outside.

Visually, the show car stands out thanks to its generous width of 2.02 meters (79.5 inches)—250 mm (9.8 in) wider than its ancestor—, the huge rear wing, ultra-wide wheel arches housing 19-inch front and 20-inch wide wheels, big air inlets on the rear fender, and an air inlet on the bonnet that houses the opening for the battery charging socket.

Inside, the Renault R5 Turbo 3E gets carbon fiber racing bucket seats, safety harness and steering wheel developed with Sabelt, the obligatory upright handbrake lever and 10 digital screens on the dashboard that look like widgets. 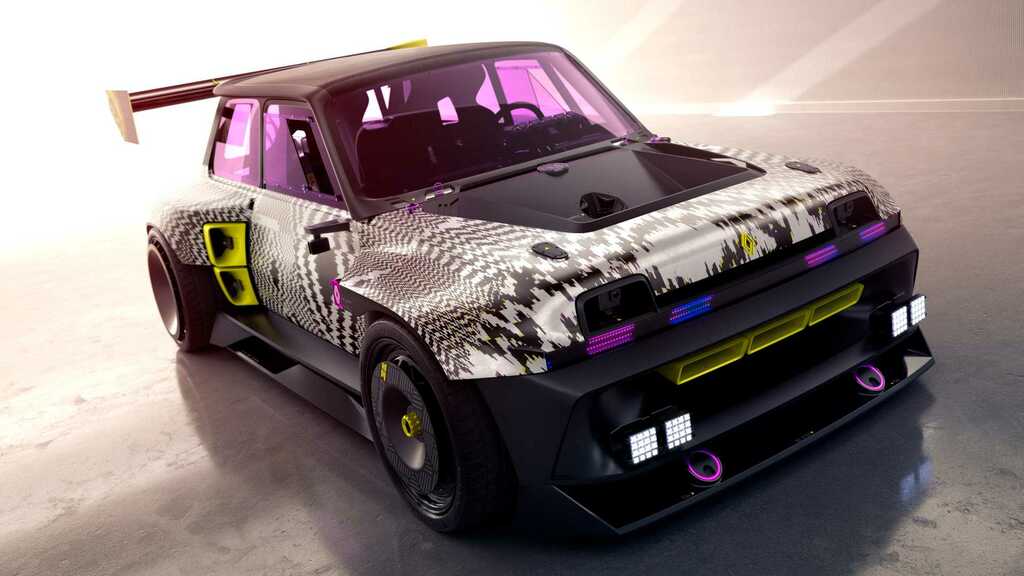 Motor1
From analysis to the latest developments in health, read the most diverse news in one place.
Renault Megane E-Tech Moose Test: 74 km/h (46 mph)

The recently unveiled next generation Fuso eCanter electric truck has its European premiere at the 2022 IAA Transportation in Hanover,…

It can add 124 miles / 200 km of range in just five minutes, quicker than any other production EV,…

InsideEVs
One place to find news on any topic, from hundreds of sites.
Renault Megane E-Tech Is A Tricky Participant In The Moose Test

It got close to the target speed, but its movements weren't predictable.