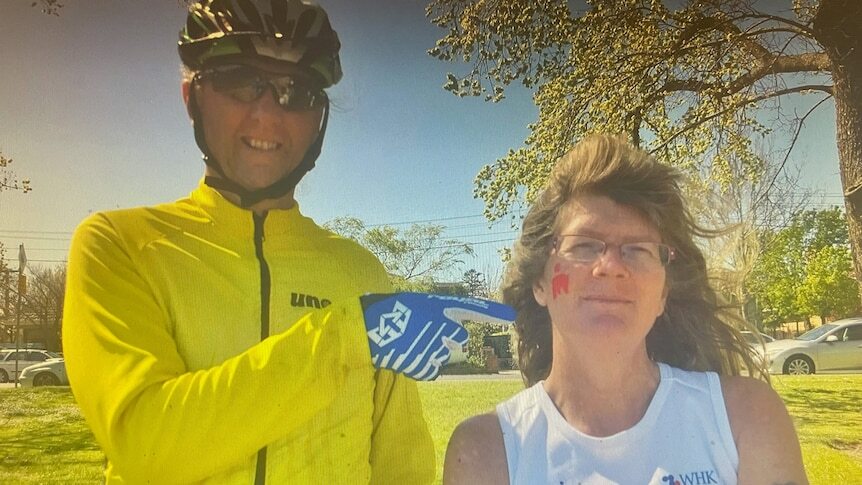 For about a month, Sandy Beach's only contact with her partner in a regional Victorian hospital has been through the small screen of a tablet device.

Two weeks after Bob Campbell-Burns suffered a severe stroke on August 19, Ms Beach was told she was no longer allowed to visit.

"That was the last I saw him," she said.

"We're able to Skype or Facetime occasionally but if the [hospital] staff don't know how to use the iPad, we don't get to see him."

Mr Campbell-Burns has his own room at Ballarat Base Hospital's stroke and heart unit where he is looked after by four carers a day.

However, Ms Beach said she had been told to bring scissors on her next visit as staff were not allowed to cut his nails for health and safety reasons.

Ms Beach, who is fully vaccinated, said it was hard to watch people go out for picnics while she was unable to help care for her partner in hospital.

"I think that's in poor taste," she said.

"Our greatest fear is [having] an exposure that affects our staff, and we lose 100 or 200 or 300 staff and then that affects services elsewhere," Mr Fraser told ABC Ballarat.

Mr Fraser said while the decisions were based on clinical advice, the hospital made "as many concessions" as it could.

There are 29 active cases of COVID-19 in Ballarat but the city's hospital is preparing to become a streaming hospital for infected patients as restrictions in the state ease.

Visitors are allowed only for end-of-life reasons, as a support partner for birth, or a parent accompanying a child.

Ms Beach said she was prepared to wear any required personal protective equipment or even a Hazmat suit.

"I know that sounds over the top but he's now on anti-depressants," she said.

She was allowed to visit him this week for the first time, after making complaints to the hospital.

"The virus isn't going to go away and there are people dying in hospitals and nursing homes just through heartache and loneliness and we just have to learn to live with it," Ms Beach said.

The Victorian Department of Health allows regional hospitals to make their own decisions about restrictions on visitors.