Tijuana, Baja California, Mexico — “Every corner has a gun,” Evens Odmond said of his home country of Haiti.

Odmond, his wife and their four-year-old son arrived in Mexico six months ago, hoping to claim asylum in the United States. They are now stuck in limbo in a border city rife with violence and unable to turn back.

“I left Haiti because there’s no life there. I’m just trying to get a better life for me and my family,” he said.

This month, the UN High Commissioner for Human Rights Michelle Bachelet said violence in Haiti had reached “unimaginable and intolerable levels”. Between April 24 and May 16, at least 92 people who were unaffiliated with gangs were killed in coordinated attacks in Port-au-Prince, the UN reported. The violence — including beheadings, chopping and burning of bodies, and sexual assault — has forced droves of people to leave.

“We just want to get into the USA, that’s the only dream we have,” he said, referring to himself and other Haitians waiting in Tijuana for the border to open.

They must continue to wait for now.

Asylum is a legal process under international law that allows people to present themselves on US soil and declare they fear returning to their home country. But since March 2020, the US has carried out nearly two million expulsions of asylum seekers. The American Immigration Council pointed out that US borders are open to international travellers, with nearly 11 million people crossing through ports of entry each month.

Odmond and his family have not applied for asylum yet and do not have a lawyer. “Let me see if they’ll cancel Title 42, and then I’ll do it,” he said.

“My big fear is, if I try to get to the border right now, they’re gonna take me back to Haiti. But if they cancel Title 42, that’s going to be an opportunity for us, because it will give us six or seven months to go to the courts,” he explained.

On Monday, the day Title 42 was set to end, border patrol officers walked along the brown wall on the San Diego side of the San Ysidro Port of Entry. Facing media cameras lined up next to the wall, Guerline Jozef, cofounder and executive director of the Haitian Bridge Alliance, said 522 people were expelled back to Haiti over the weekend under Title 42.

Haitians are targets for violence as they migrate “because they are travelling in their Black bodies,” she told Al Jazeera. She called it “a death sentence” to send people back to Haiti.

The turmoil can be traced back to the country’s colonial history and Haitians having to pay France billions of dollars for their freedom, she said.

The 1970s and 1980s saw a wave of refugees fleeing due to political turmoil in the country. A massive earthquake in 2010 killed hundreds of thousands of people. And in 2016, Hurricane Matthew devastated southern Haiti, forcing internal and external migration.

There is now a void of political decision-making following the assassination of Haitian president Jovenel Moise last year, and gang killings are displacing entire neighbourhoods, she explained.

“The root causes of migration are directly connected to political instability, climate change, and the fact we have been impoverished by the powers of the world, including France and the United States,” Jozef said.

Hearing Odmond’s story prompted sudden tears in her eyes. “I would tell the family that we are here for them, and we will continue to fight on their behalf,” she said.

The White House had announced Friday it would appeal the judge’s ruling.

According to Aaron Reichlin-Melnick, senior policy counsel at the American Immigration Council, to lift the Title 42 order, the administration would need to issue a notice of proposed rulemaking, take comments for 30-to-60 days, and consider all comments before issuing a final rule. The process would take six months to a year, minimum, he tweeted. And after that, it would be challenged.

Monika Langarica, with the UCLA Center for Immigration Law and Policy, told Al Jazeera the judge’s order outlined the deficiencies in how the administration lifted Title 42 and echoed Reichlin-Melnick’s contention that it could take months for officials to try again. In the short term, she said the administration could seek an emergency stay of the injunction, while also appealing the order. If that is granted, they could lift Title 42.

“Tragically the only thing to tell people right now is that Title 42 remains in place,” she said. “There is no systematic viable option by which they could seek asylum. And now we’re going to keep fighting to urge an end to this, but I think it would be disingenuous to offer a timeline or end to this nightmare at this point.”

Patricia, a transgender activist from Mexico who did not want her last name published because she fears for her life, attended a protest and vigil on Sunday evening in Tijuana, Mexico. She lives in a hostel there, waiting for the border to open.

She tried to claim asylum three months ago but was denied. “The last time I tried to go alone, I spoke with an immigration officer from the US,” she said in Spanish over WhatsApp. “He told me they are not accepting asylum requests from anyone because the border was closed.”

“Title 42 is an absurd excuse by the United States,” she said.

She worked for a transgender rights collective in the Mexican city of Juarez, but in May 2021, she said she was threatened and extorted by an organized crime group. “[The group] previously killed a missing activist in the area who was never found,” she said. “I have lived in Tijuana for a year for fear that they will find me and kill me.”

Patricia is now working with a lawyer on her asylum case. She previously claimed asylum in the US four years ago but was denied; she said they didn’t believe she was transgender and said Mexico was safe for people like her.

“I feel powerless not being able to fulfil my dreams,” she said after hearing the news on Friday that Title 42 will remain in place.

“I’ve been through a lot, and when I’m at the doors, they close them. It makes me angry that they are unaware of what people in the LGBTQ community go through.”

She wishes for a future with more freedom and no discrimination. “I hope for a world without borders, where walls do not prevent us from achieving our dreams, where people respect us just as they respect heterosexuals,” she said.

Odmond and his family also feel afraid waiting in Tijuana due to kidnappings and violence.

“My big dream for my wife and my son right now is to get to the US, and help my family in Haiti, my mom, my brother, my sister,” he said. “There are kidnappings in Haiti, also. That’s the reason we left Haiti, and here in Mexico it’s the same.” 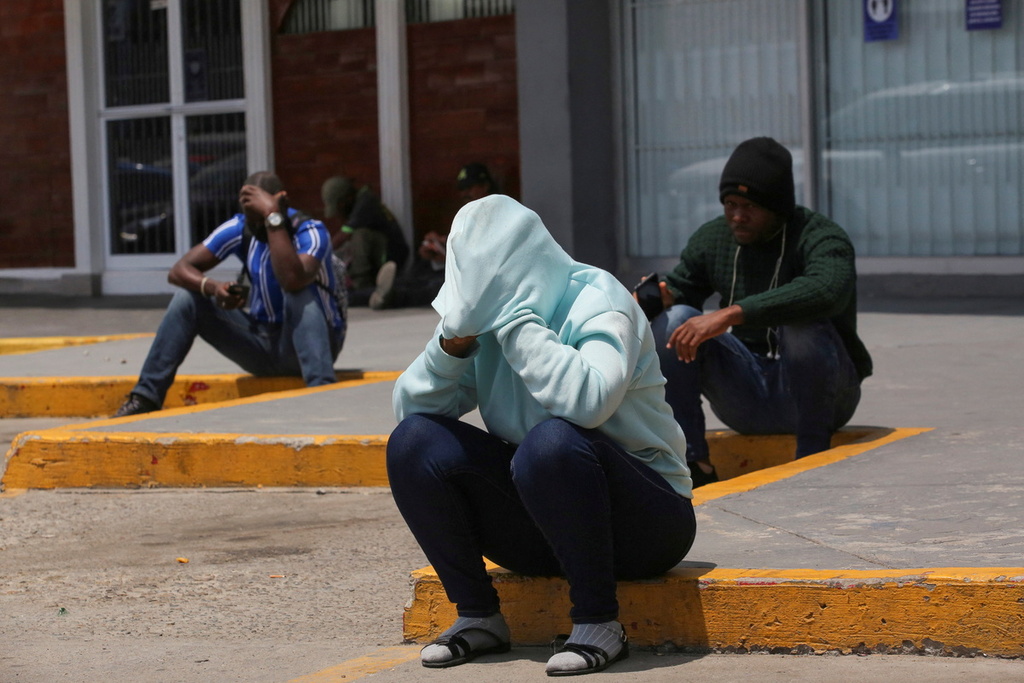 Reuters
One subscription that gives you access to news from hundreds of sites
At Mexico-US border, migrants pray children will be born in US

DHS intelligence is tracking between 40,000 and 50,000 migrants in Mexican shelters.