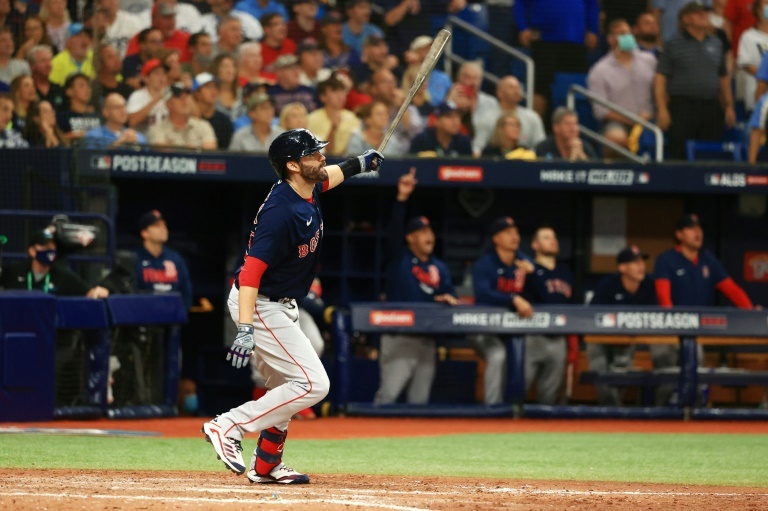 Los Angeles (AFP) - The Boston Red Sox hammered a franchise playoff record five home runs on Friday as they pounded the Tampa Bay Rays 14-6 to level their Major League Baseball playoff series at one game each.

Boston had 20 hits on the night, bouncing back from a game-one shut-out in emphatic style at Tropicana Field in Tampa.

After Boston put two early runs on the board, the Rays responded with a grand slam from first baseman Jordan Luplow.Yandi Diaz added a run-scoring single to put the Rays up 5-2 after one inning.

But Boston hit two home runs in both the third and fifth innings to regain control.

Alex Verdugo and Xander Bogaerts hit solo blasts in the third and J.D.Martinez belted a three-run homer in the fifth -- when Enrique Hernandez added a solo blast.

The record-setting fifth-homer came from Rafael Devers in the top of the eighth inning and put the Red Sox up 11-6.

Christian Vazquez drove in a run in the ninth and Hernandez scored two with his fifth hit of the night.

The Red Sox will try to ride the momentum when the best-of-five American League division series shifts to Boston on Sunday.

Meanwhile the Houston Astros powered their way to a 2-0 lead over the Chicago White Sox in their AL series, erupting for five runs in the seventh inning on the way to a 9-4 victory.

The outburst included a two-run double from Carlos Correa and a two-run homer from Kyle Tucker that saw the Astros break a 4-4 deadlock.

They took a 2-0 lead in the best-of-five American League division series and can wrap up a spot in the AL Championship series with a victory in Chicago on Sunday.

"Obviously you feel great going to Chicago with a two-game lead, but at the same time we've got to take care of business," Correa said."It's not 100%."

In the National League, all eyes were on San Francisco where the Giants hosted the Los Angeles Dodgers in what promised to be an instant post-season classic.

The reigning World Series champion Dodgers won 106 regular-season games but still had to get past the St.Louis Cardinals in a wild card playoff game to earn a shot at the Giants -- who edged them for the NL West division crown with 107 regular-season wins.

The series is the first ever in the post-season between the longtime rivals and matches the winningest clubs ever to meet in the playoffs.

The clubs have combined for four World Series titles and six league crowns since 2010.

Elsewhere in the National League, the Milwaukee Brewers emerged with a 2-1 victory from a tense battle with the Atlanta Braves.

But Morton opened the seventh by hitting Avisail Garcia with a pitch and four pitches later Rowdy Tellez slammed a two-run home run off Morton to snap a scoreless tie and put the Brewers on the road to victory.