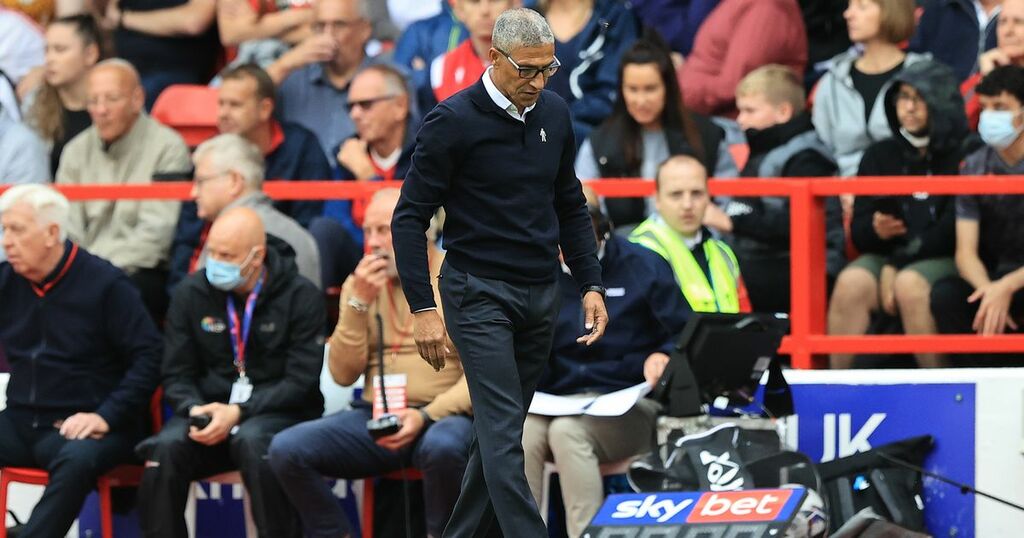 “When times are tryin’, we keep the red flags flyin’.”

Right now, red flags are not just being waved in the stands at Nottingham Forest. Metaphorically at least, they are flapping in an increasingly ill wind due to dire results on the pitch.

The club’s start to the season has been abysmal; it is their worst in more than a century. Already there are fears this campaign could end in disaster.

The Reds remain rock bottom of the Championship with just a solitary point to their name, having suffered a fifth defeat on Sunday when Cardiff City came from behind to triumph 2-1.

Those giant Forza Garibaldi banners unfurled prior to kick-off at the City Ground summed up the fractious situation.

Amid the woeful form, the uninspiring performances, the years of misery, Forest supporters continue to turn out in their thousands. They belt out Mull of Kintyre with gusto, even when the stadium audio doesn’t get it quite right. They travel in numbers and keep up a constant noise when the team are away.

There is anger and apathy among the fanbase. They are not being given much to cling to. Hope feels in short supply.

Their team do have promising moments in games. The goal they scored against the Bluebirds was nicely worked and expertly finished by Lewis Grabban - the first time he has found the net this term.

But those kinds of moves do not happen anywhere near enough. And there is a worrying tendency to simply collapse. The odd bright spell won’t get you very far. They need more.

Coping with Cardiff’s brutal physicality was not easy. In the first half, countless Forest players put bodies on the line to keep their opponents at bay, and they just about shaded the opening 45 minutes.

The second half was woeful, though. Two sloppy goals to add to an unenviable growing catalogue of them and barely anything by way of response.

The problems are mounting.

Solving their goalscoring woes was the key priority in the summer. Forest do look to have done some decent business in trying circumstances, but the big concern is that not getting a deal for another striker over the line comes back to haunt them.

Chris Hughton didn’t sound particularly hopeful of the free agent market coming to the rescue on that front when questioned after the full-time whistle.

Regardless, it is his future on the line.

His team haven’t won a league game since April 5. His point about small margins deciding outcomes has some merit to it, but the stats tell their own sorry story.

Some of Hughton’s predecessors have been axed for less.

He hasn’t had the smoothest time of it while in the hot seat - covid problems, a difficult transfer window, late arrivals, new signings (Braian Ojeda and Mohamed Drager) not even able to play or train with the group.

And not all of the problems Forest face are Hughton’s fault. Poor recruitment in the past and needing to cut costs this summer are a longer-term legacy - something which will take time to put right. New CEO Dane Murphy said in his programme notes: “This club is putting the pieces into place. Realistically, it will take two or three transfer windows to fully embed the new philosophy.”

Hughton also has some big-name players who are out of form and look short of confidence, with Brice Samba and Joe Lolley among those not hitting the heights they have shown in the past so far this term.

But all of those issues come with the territory. Up and down the country managers will be able to reel off long lists of obstacles they have to try to overcome.

What did you make of Sunday's game? Have your say in the comments below

Ultimately, the only thing any of them are judged on is results. When it comes to the crunch, that’s what will decide someone’s fate.

It is Hughton’s job to find solutions with what he has at his disposal; to get the best out of the group in the dressing room.

Forest cannot allow the rot to continue for much longer. Hughton was brought in last season to rescue them from a miserable start under Sabri Lamouchi.

If he cannot save himself, there will be someone else willing to cast the lifeboat.

Either way, something has to give.