Record number of Yellowstone wolves shot after roaming outside park

By Guardian staff and agencies 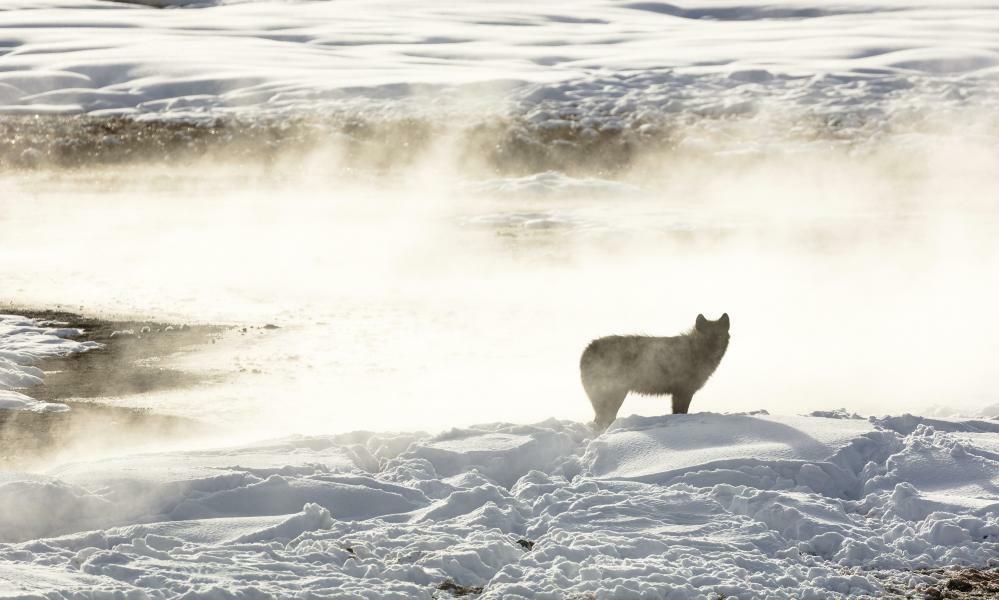 Twenty of Yellowstone national park’s renowned gray wolves roamed from the park and were shot by hunters in recent months – the most killed by hunting in a single season since the animals were reintroduced to the region more than 25 years ago, according to park officials.

One pack – the Phantom Lake pack – is now considered “eliminated” after most or all of its members were killed over a two-month span beginning in October, according to the park.

Now, only an estimated 94 wolves remain in Yellowstone. But with months to go in Montana’s hunting season – and wolf trapping season just getting under way – park officials said they expected more wolves to die after roaming from Yellowstone, where hunting is prohibited.

The park superintendent, Cam Sholly, has urged Montana’s Republican governor, Greg Gianforte, to shut down hunting and trapping in the area for the remainder of the season.

But Gianforte, who himself trapped and killed a Yellowstone wolf last year, violating state hunting regulations, has not been receptive to the request, according to a letter in response to Sholly obtained by the Associated Press.

“Once a wolf exits the park and enters lands in the State of Montana it may be harvested pursuant to regulations established by the [state wildlife] Commission under Montana law,” Gianforte wrote on Wednesday.

Park officials said in a statement to the AP that the deaths marked “a significant setback for the species’ long-term viability and for wolf research”.

The Trump administration ended federal endangered species protections for the gray wolf in late 2020, sparking an outcry from advocates who called the decision “premature” and “reckless”, and leaving wolves subject only to state and local protections.

Urged by Republican lawmakers, Montana wildlife officials last year loosened hunting and trapping rules for wolves statewide. They also eliminated longstanding wolf quota limits in areas bordering the park. The quotas, which Sholly asked Gianforte to reinstate, allowed only a few wolves to be killed along the border annually.

The original quotas were meant to protect packs that draw tourists to Yellowstone from around the world for the chance to see a wolf in the wild.

Under new rules, Montana hunters can use bait such as meat to lure wolves for killing and trappers can now use snares in addition to leghold traps.

“Allowances for trapping and especially baiting are a major concern, especially if these tactics lure wolves out of the park,” a Yellowstone spokesperson, Morgan Warthin, said.

Fifteen of the wolves were shot after roaming across the park’s northern border into Montana, according to figures released to the AP. Five more died in Idaho and Wyoming.

Marc Cooke, with the advocacy group Wolves of the Rockies, predicted a backlash against Gianforte and the state for not doing more to shield wolves leaving Yellowstone.

“People love these animals and they bring in tons of money for the park,” Cooke said. “This boils down to the commercialization of wildlife for a small minority of special interest groups.”

Montana’s efforts to make it easier to kill wolves mirror recent actions by Republicans and conservatives in other states such as Idaho and Wisconsin. The changes came after hunters and ranchers successfully lobbied to reduce wolf populations that prey on big game herds and occasionally on livestock.

As many as one-third of Wisconsin’s gray wolves probably died at the hands of humans in the months after the federal government announced it was ending legal protections, according to a study by University of Wisconsin scientists released in July.

In September, the US Fish and Wildlife Service said it would examine whether federal endangered species protections should be restored for more than 2,000 wolves in northern US Rockies states including Montana, Idaho and Wyoming.

A representative of the Montana hunting industry said outfitters and guides supported the preservation of wolves inside Yellowstone. But once the animals crossed the boundary, sustainable hunting and trapping should be allowed, said Mac Minard, executive director of the Montana Outfitters and Guides Association.

Minard questioned whether the 20 wolves killed so far this year after leaving Yellowstone should even be considered “park wolves”.

“That just doesn’t make sense,” he said. “Why aren’t they ‘Montana wolves’ that happened to go into the park?”

The wolf Gianforte killed last February was six to seven years old and had been born in Yellowstone national park. It was fitted with a radio collar to track its movements in 2018, Warthin said.

Trappers have the option to release radio-collared animals so they can continue to be used for research. A certification course for wolf hunters that Gianforte neglected to take, violating state hunting regulations, includes instruction on the importance of radio-collared wolves to monitor the population and manage wolf pack attacks on livestock.

“A wolf that’s been wearing a radio collar is going to be a terrible trophy, because those collars mess up the fur around their neck,” Carter Niemeyer, a former wolf recovery coordinator for the US Fish and Wildlife Service, told the AP in March. “And then symbolically, you’ve got a wolf that researchers spent thousands of dollars on, and then to have somebody thoughtlessly kill that animal when they could have released it back to research – that’s a lot of poor judgment.”

Gianforte trapped and shot the male wolf on 15 February about 10 miles (16km) north of the park, on a ranch owned by Robert E Smith, director for the conservative Sinclair Broadcasting Group and a Gianforte campaign donor, according to the Mountain West News Bureau, which first reported the violation.