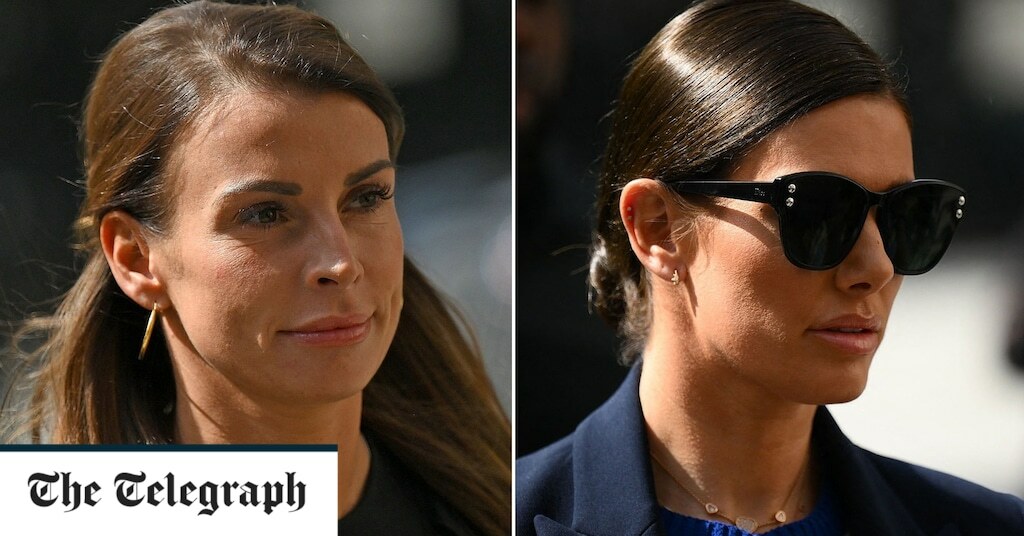 The Independent UK
Coleen Rooney vs Rebekah Vardy: Key moments from day three as Vardy breaks down in tears

Rebekah Vardy became tearful several times in the witness box as she was accused of leaking stories and throwing her agent “under the bus” during her evidence at the High Court.

As part of a high-profile libel claim against Coleen Rooney, Mrs Vardy wiped away tears on multiple occasions as she was cross-examined by Mrs Rooney’s barrister.

On Thursday, Mrs Vardy left the witness box for the third day as she finished being questioned by David Sherborne in what has been dubbed the “Wagatha Christie” case.

He added: “So when Mrs Rooney wrote on the 9 October that she was right in suspecting you and your account… She was right, wasn’t she?”

“No, she was wrong,” Mrs Vardy replied.

The barrister referenced that Mrs Vardy’s agent Caroline Watt is not giving oral evidence after it emerged at a hearing in April that she was “not fit” to do so, also withdrawing her written statement.

Mr Sherborne continued: “The journalists you wanted to call knew Caroline Watt was the source and that it came from you but you didn’t want to do the dirty work yourself…That’s why Ms Watt couldn’t face coming to court in the end to have been found to have lied.”

However, Mrs Vardy said: “I think she has been driven to suicidal thoughts by these proceedings and the antics of the defendant.”

Mr Sherborne concluded: “I have to put it to you that it’s not her that betrayed you, as you suggest, it’s you that betrayed her by throwing her under the bus.”

The former Dancing On Ice contestant appeared emotional as she said: “That is not true.”

Mrs Vardy also appeared emotional when questioned over whether she had seen a so-called “flooded basement” post – one of the Instagram stories Mrs Rooney claims were only seen by Mrs Vardy’s account during her “sting operation”.

Questioned about alleged inconsistencies in her evidence, Mrs Vardy replied “there was a lot of abuse during that time” before she started to cry in the witness box.

As the judge left the room after granting a short break, a tearful Mrs Vardy put her head in her hands on the desk.

Mrs Vardy had previously described the day of Mrs Rooney’s viral online post as “such a blur”, and became emotional on Wednesday when prompted about the abuse she and her family had received.

She will be questioned by her own barrister on Friday before Mrs Rooney begins her evidence.

During the third day of the trial, the High Court also heard one of the articles in the case concerned Mrs Rooney’s car being damaged in early 2019, with a picture of the damaged Honda being posted on her private Instagram account.

A story was published in The Sun about Mrs Rooney’s car three days later, written by journalist Andy Halls.

Mr Sherborne said: “You didn’t object at any stage to the fact that Ms Watt is plainly passing on information from Mrs Rooney’s private Instagram account to Andy Halls.”

Mrs Vardy said The Sun already had the information, adding: “I didn’t think she was passing on any new information.”

Mr Sherborne asked: “Take the word new out of it. Did you or did you not know that Ms Watt was passing on information from Mrs Rooney’s private account?”

Mrs Vardy replied: “She was talking to Mr Halls about information that was already being discussed.”

The court heard that Mrs Rooney later posted a public tweet saying it was “sad” someone who followed her was “betraying” her after the article appeared in The Sun.

While purportedly discussing this tweet in a private WhatsApp conversation, Ms Watt told Mrs Vardy “It wasn’t someone she trusted. It was me”, in a message accompanied by a laughing face emoji.

The barrister put it to Mrs Vardy that was Ms Watt admitting leaking the information to the journalist.

She replied: “That seems to be what she is saying, but I’m just looking at the times, at 18.47 I’m bathing the children, there is no response from me.”

Mr Sherborne accused Mrs Vardy of trying to throw herself a “lifeline” and asked why, after bathing her children, she did not respond to Ms Watt to challenge what she had said, if she did not know about and authorise the leak.

Mrs Vardy replied: “Without wanting to make fun of anyone, Gemma Collins face-planting on the ice was the next message, and that’s what I had on while I was bathing my children.”

Mrs Rooney, who is attending the trial alongside her husband, Wayne, made no response as Mr Sherborne read out parts of an interview Mrs Vardy gave in which she said arguing with Mrs Rooney “would be like arguing with a pigeon” that would defecate in your hair.

The libel battle comes after Mrs Rooney publicly claimed that an account behind three fake stories in the Sun which she had posted on her personal Instagram account was Mrs Vardy’s.

The Independent UK
Coleen Rooney vs Rebekah Vardy: Key moments from day three as Vardy breaks down in tears