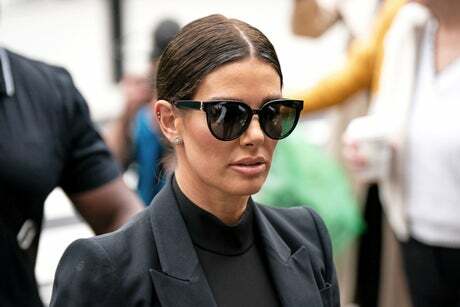 Coleen Rooney trial: Rebekah Vardy defends ‘gossiping’ with her agent
Rebekah Vardy added: ’She never said once she was stalking her account’

The Independent UK
Rebekah Vardy ‘embarassed’ to be called ‘unofficial leader of the Wags’, court hears

Rebekah Vardy called Coleen Rooney “a c*** ” after being unfollowed by her on Instagram, a court has heard.

The 40-year-old took to the witness box for the second day of her libel trial against Ms Rooney, who has accused Ms Vardy of leaking “false stories” about her to the press.

On one instance, the agent messaged Ms Vardy to let her know Ms Rooney, the wife of former England star Wayne Rooney, had unfollowed her on Instagram, the High Court was told.

“’Oh my god’, you say, ‘I just saw, what a c**’,” Mr Sherborne said, explaining the exchange came after the alleged leak of information about Ms Rooney being in a car crash from her private Instagram.

Ms Vardy denied her agent had leaked the car crash post to The Sun.

She was also asked by Ms Rooney’s barrister about messages discussing leaking - or potentially leaking - stories to the press at the High Court in London on Wednesday.

He said Ms Vardy and her agent discussed leaking a story to the press about Leicester City players being “fuming” that one of their teammates, Riyad Mahrez, had missed training.

The High Court heard Ms Vardy told her agent: “I just don’t want it coming back on me.”

Ms Vardy told the court she was “just gossiping” when she told her agent the players were “fuming” and denied this got leaked to The Sun by Ms Watt.

She also said she was “just joking” when she discussed with her agent leaking a cheating story about a mystery estranged celebrity couple.

Ms Vardy denied the suggestion it was “standard practice” for her to leak private information to The Sun via her agent.

Ms Rooney accused Ms Vardy of leaking “false stories” to the press in a viral social media post in 2019. This detailed a “sting” operation to try and find the source of the leaks - which resulted in Ms Rooney getting the nickname “Wagatha Christie”.

Coleen Rooney trial: Rebekah Vardy defends ‘gossiping’ with her agent
Rebekah Vardy added: ’She never said once she was stalking her account’

The Independent UK
Rebekah Vardy ‘embarassed’ to be called ‘unofficial leader of the Wags’, court hears