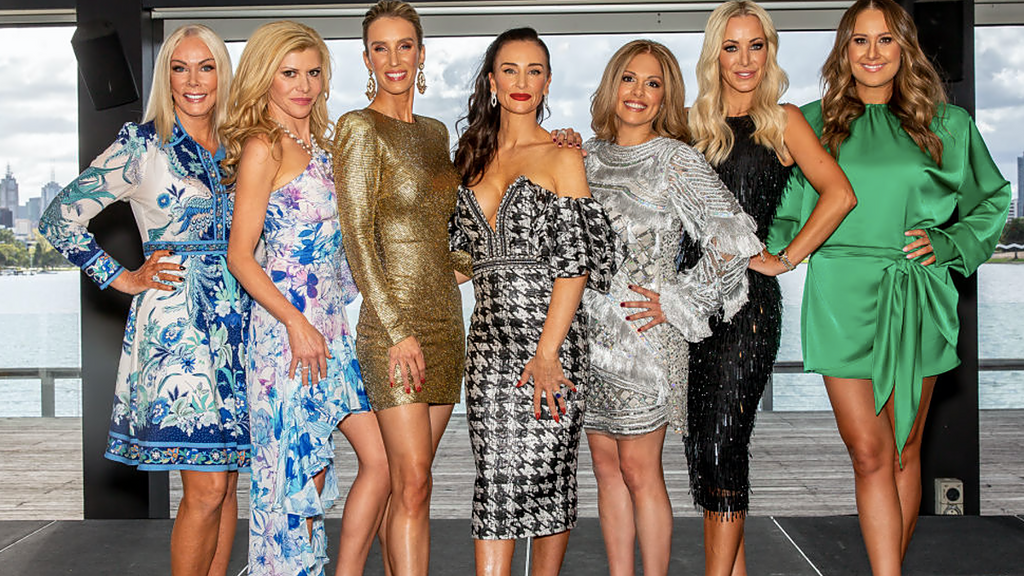 After three years off the air, The Real Housewives of Melbourne is back and better than ever, featuring some beloved old faces and some sparkly new ones.

The show’s long-awaited fifth season was dripping in controversy, mystery and downright cattiness from the get-go.

The cast initially featured OG girls Gina Liano, Lydia Schiavello and Janet Roach, as well as Gamble Breaux (who joined in season 2), with sassy psychic Jackie Gillies exiting the show to return to her native Newcastle.

Shortly after, Liano and Schiavello mysteriously bowed out of the show and Jackie Gillies returned, and new Housewife Simone Elliott was announced as well.

As if the abrupt shift wasn’t strange enough, before long, the show was back in the headlines once again after two former cast members, the aforementioned Lydia Schievello and fellow OG Housewife Chyka Keebaugh, got into a social media biff over an edited Instagram photo.

But enough about the done and dusted cast, wanna hear about the drama involving the new cast?

Well, before we’d even seen a bloody trailer for the new season, Janet Roach had been throwing all kinds of shade on social media, including one post where she told a few of her former cast members that she missed having them on the show, now that she’s stuck with the new girls.

Before long, word got out that one of the newbies had yeeted herself out of the show midway through filming: CNN journo, Anjali Rao.

Apparently Anjali and Janet quickly became locked in a nasty feud after Janet shared a photo of Anjali that she didn’t like (a surefire way to ignite an almighty bust-up between Melbourne Housewives, apparently).

This kicked off a series of mudslinging on social media and in the press. Back in August, Anjali told The Herald Sun that she was “self made,” as opposed to the other women on the show.

“To go into a world like Housewives was different, particularly when I am an entirely self made woman – professionally, financially, all of it – I didn’t have to hook up with somebody or marry someone to have it,” she said at the time.

On Friday, Janet rinsed Anjali while speaking to news.com.au: “I’m just saying, Anjali, I know you’re listening, but nobody knows who you are so we don’t actually give a shit. Chill out, let’s face it.”

Meanwhile Anjali referred to Janet as “Granny Janny” during a Foxtel Q&A the other night and Janet has since responded on Insta, accusing the new girls of constant age-shaming while filming the show:

So there’s all the wild drama you’ve missed, but in terms of the show itself, how does it actually stack up?

Well, I’ve been lucky enough to catch the first few eps and, well… Lydia who?

Frankly, I didn’t even notice she was missing until I went to write this article and found the photo of the original season 5 line-up.

There’s so much bloody chaos from the get-go! So many new faces with new energy and old faces with the same old spice we’ve come to know and love from the Melbourne Housewives.

It’s very old girls vs new girls, I will say that. But I wouldn’t have it any other way, to be honest.

I can already count about three or four iconic moments that will go down in Real Housewives of Melbourne history, just from the first two episodes alone.

A post shared by Real Housewives of Melbourne (@rhomelbourne)

With that said, ya notice how I wrote “Lydia who?” but not “Gina who?” Yep, our girl is very much missed. I’m sorry to say it, but there’s definitely a drag queen-shaped hole in the series with Gina gone.

But as they say, the show must go on! And what a bloody show it is.

Overall it has all the ingredients you need to make a damn good season of Housewives: it’s got shade and side-eye, opulence and affluence, hilarious catch phrases (shoutout to Anjali for “nuttier than squirrel-poo”), and super important conversations.

Huge huge HUGE shoutout to my all-time favourite Aussie Housewife, Jackie Gillies, for bravely discussing her journey with fertility issues and IVF. We all know how that story ended (spoiler alert: it’s a fairytale ending for the rockstar couple <3), but her raw, honest and open discussions in the first few eps before she falls pregnant really struck a cord with me, and I’m sure it will with others as well.

The Real Housewives of Melbourne premieres tomorrow at 8.30pm on FOXTEL.