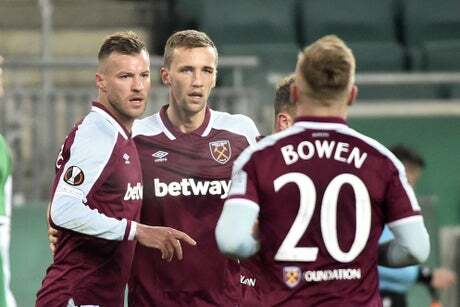 West Ham secured their place in the last 16 of the Europa League with a routine 2-0 win over Rapid Vienna.

Andriy Yarmolenko gave the visitors the lead in the first-half, before Mark Noble made it two with the last kick of the opening period.

Rapid Vienna held firm and started to grow into the game, but a five-minute spell just before the break put the Hammers in complete control.

Nikola Vlasic worked the ball well on the left wing before standing up a cross to the far post, where Yarmolenko was on hand to head home the opening goal.

And with the final action of the half, Yarmolenko was brought down in the box, with Noble making no mistake from the spot for his first Europa League goal.

Bowen and Tomas Soucek both had the chance to extend the lead in the second-half, but were denied by the goalkeeper.

David Moyes used the opportunity to bring off some of his key men with an eye on this weekend’s trip to face Man City, and gave Sonny Perkins his debut, with the youngster having a shot well saved with his first touch.

West Ham saw out the rest of the match for a comfortable win, and it’s job done in Europe for the Hammers until the last 16 in March.