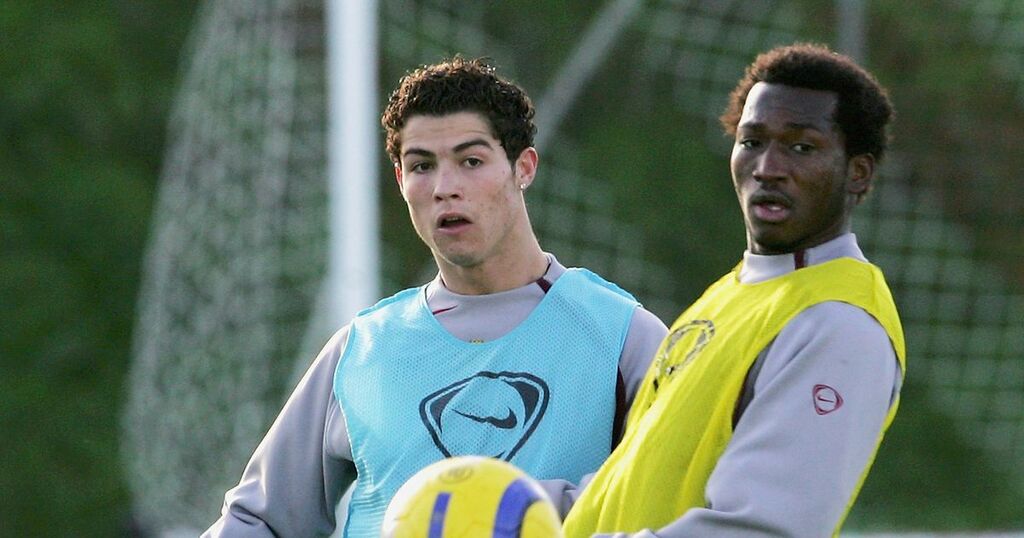 As former Manchester United player and legend of the game Eric Djemba-Djemba has announced his retirement from football, I thought I’d look back at the weird and wonderful transfer windows that Manchester United had in the 2003/4 seasons, which saw the man who was so good they named him twice come through the door but also a host of other names.

Looking back it is truly a window that has the widest range of signings when it comes to quality and shows how Sir Alex Ferguson sometimes took a scatter gun approach to transfers.

So let’s have a look at the seven major signings United made that window and rank them from worst to best, starting with:

Now if you didn’t know that a player called Dong Fangzhou had ever played for United I wouldn’t be surprised.

In January 2004, he signed from the Chinese side Dalian Shide for a fee of £500,000 after reported interest from Real Madrid and Inter Milan.

This was partly due to the player having to spend two years in Belgium with Royal Antwerp due to an issue with his work permit.

He scored no goals during his time and had his contract terminated in 2008 and comes bottom of this list due to the fact the Athletic reported that Manchester United were given a full refund for the player by Dalian, which if we’re being honest is embarrassing for all involved (but I wish we could have agreed the same for Bebe in 2010).

He is now apparently coaching children back in China, so I'm glad he is still in the sport he loves.

An absolutely stellar list of striking talent so far, I say with a heavy tone of sarcasm.

David Bellion only gets slightly higher on the list than Dong because he managed to score two goals and United were able to secure a fee for selling him on.

Signed from Sunderland for a fee of £3 million, he soon found chances limited behind the likes of Ruud Van Nistlerooy and another name on this list (which I won’t spoil here because that takes all the fun out of it).

It’s safe to say Bellion was not the French superstar many touted him to be, with his highest ever tally being 12 goals for Bordeaux, but the fact he later fell behind in the pecking order to former Arsenal striker Marouane Chamakh really tells you all you need to know about his career.

Some of these you really start to think about what was Ferguson doing.

Kleberson tops the bill as probably the most disappointing signing on this list, due to how well he played in the 2002 World Cup for Brazil, earning praise from his manager Felipe Scolari.

He joined United after interest from Barcelona, Newcastle, Leeds United and Celtic for a fee of £6.5 million. Injuries unfortunately hampered the player's career as he suffered a serious injury in just the second match of his United career.

Was ultimately sold to Besiktas for under £3 million but was a case of what could have been.

The man of the hour, Djemba-Djemba was an interesting footballer to say the list. He would always make the game exciting, however, that was usually due to his misplaced passes putting United fans on edge.

Signed to be a long-term replacement for Roy Keane, it’s safe to say he didn’t really live up to those expectations.

However, he still holds a place dear in United fans hearts even if he was an absolutely terrible midfielder and the fact he scored against Leeds once to help them win in the last minute of a cup fixture.

To say he’s only just retired from football now, I’m glad he was able to make a career for himself in the long run, but the fact he’s fourth on this list is slightly worrying but they get better from here.

Tim Howard’s time between the sticks for United was truly a mixed bag. His poor parry against Porto (try saying that five times fast) led to United’s elimination from the Champions League in 2004.

But he was also in net for the FA cup final win again Millwall, though he wasn’t really threatened.

Overall his career at United was unspectacular and he will be better remembered for his time at Everton and in the USA national team, but he was a good stop-gap between Barthez and arguably one of United’s greatest ever keepers in Edwin Van der Sar.

Louis Saha was a great player, the problem was he could never stay fit. Constant injuries blighted any chance for the player to keep up his great form.

But when he was fit he was a fantastic striking option for United and he always gave his all for the club. He was vital in United winning the League cup in 2006, scoring seven goals along the way.

Overall, he scored 42 goals in 120 games, but I have no doubt he would have had so many more if he wasn’t so unlucky with injuries.

His name escapes me, but he’s just recently re-signed for the club after a long time away.

Can’t remember if he did anything special during his time here but something’s telling me everyone would be mad if I didn’t put him first.

Oh, I remember now, his name was Cristiano Ronaldo.

What are the best and worst transfers you remember for Manchester United? Follow our new United Fan Brands Writer Casey Evans on Twitter to get involved in the discussion and give us your thoughts in the comment section below.