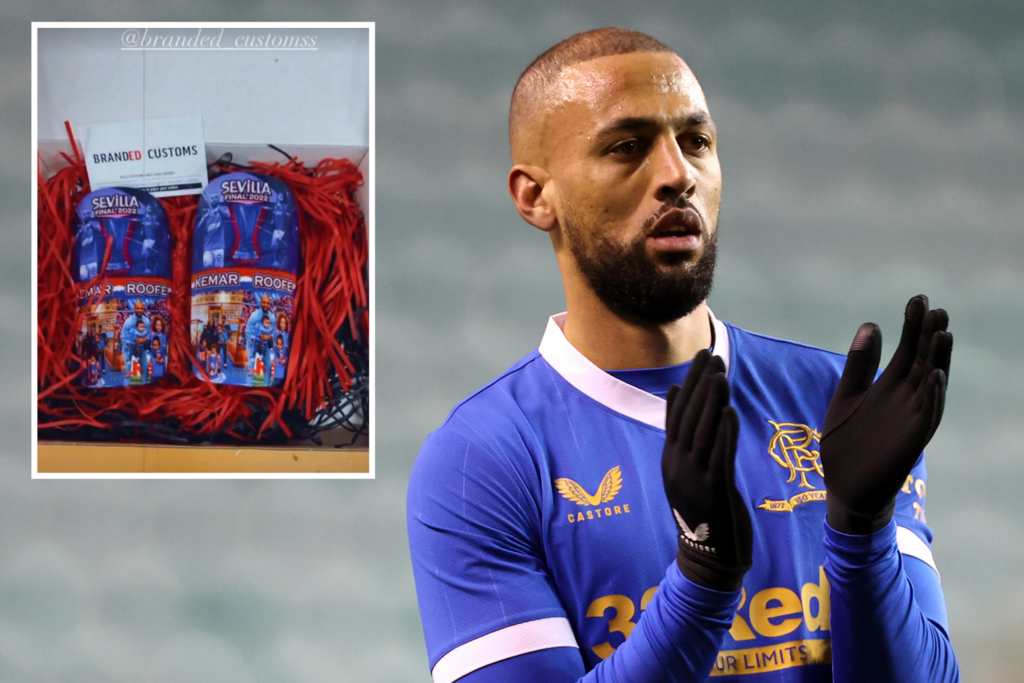 The Kilmarnock manager says the Ibrox side must finish the season with some silverware.

Giovanni van Bronckhorst’s heroes took to the skies and the next stop is Seville.

It was almost 11pm on Wednesday night and the final caller on the line was in Washington DC.

He wanted to congratulate Celtic on becoming league champions and outline his strategy to help derail Rangers in the Europa League Final next Wednesday.

The caller’s father, Jackie McGrory, had played for Kilmarnock against Eintracht Frankfurt in 1964, in a long discontinued European contest known as the Inter-Cities Fairs Cup.

Killie won 5-1 in the first ever European tie played at Rugby Park. They were managed by Willie Waddell who, eight years later, would guide Rangers to the club’s so far only Euro trophy in Barcelona.

Now the caller is going to wear the strip his dad swopped for a Killie jersey at time-up 58 years ago and trust the family
heirloom can send negative messages to Giovanni van Bronckhorst and his stars in Seville.

I was tempted to say the shirt didn’t do much good for Frankfurt when they visited Ayrshire.

But that’s not the point.

Malky Mackay was bang on the money when he said Rangers’ European final appearance this week brings gravitas back to
Scottish football.

Money being the operative word.

Celtic and Rangers could bank £100m between them if both reach the group stage of the Champions League next season.

The Ibrox side’s place there is, of course, dependent on them winning in Seville.

But the Ross County manager’s use of the word gravitas is accurate and redundant at the same time.

Gravitas and financial gain are for the number crunchers, spreadsheet compilers and anybody else who’s not a fan.

This is about status, bragging rights and one set of supporters’ ability to lord it over the other lot.

From Washington to Wishaw.

It’s about the human condition and primitive instincts.

The night of May 18 will be an occasion of personal torment for the Celtic support who will fervently hope Rangers lose to the Germans.

At which point they can take satisfaction in declaring Rangers’ season a comparative failure to the one they have enjoyed.

Conversely, the thought of going 2-1 down in terms of European trophies will be too awful to contemplate.

Tens of thousands of Rangers supporters are currently criss-crossing the continent and accumulating more air miles than the average astronaut.

They want to be in Seville because they believe it’s written in the stars Rangers will be ascendant in Andalucia. And they have given absolutely no thought to the possibility of the stars suffering from a spelling disorder.

None among them will, due to the outbreak of euphoria that followed the final whistle against RB Leipzig, remember the calmly-spoken words from van Bronckhorst at the time.

He summarised his team’s arrival in a European final by saying: “Everything starts with belief.”

When Rangers got to the final against Zenit St Petersburg in Manchester 14 years ago, one of the players told me the dressing-room philosophy was ‘Protect the zero.’

In other words, be hard to beat by being defensively sound and see if the rest would take care of itself. And it did – up until the final hurdle.

Giovanni’s modus operandi is the exact opposite. Attack has become his team’s best form of defence.

Be aggressive. Go toe to toe.

Project the hero. Never mind protect the zero. It’s a theory that has served him well and left him with at least 90 minutes to prove its absolute veracity.

But it’ll have to overcome not just Eintracht but transatlantic ill-will and wishful thinking on a global scale that speaks for the intensity of a rivalry that knows no bounds.

The Kilmarnock manager says the Ibrox side must finish the season with some silverware.

Giovanni van Bronckhorst’s heroes took to the skies and the next stop is Seville.