WASHINGTON — It’s a maxim in politics: Bad economic news trumps the good. And that is what scares President Joe Biden and the Democrats.

Just five days earlier, the nation’s unemployment rate had plummeted to nearly a 50-year low, a sign of a strong economy that the White House worries is getting lost in a swirl of consumer concerns about rising costs and deeper anxieties triggered by war and pandemic.

“Economic statistics don’t matter anymore in this polarized political environment,” said Steve Israel, a former Democratic congressman who oversaw the party’s campaign arm from 2011-15. The small percentage of swing voters up for grabs in November’s midterm election, he continued, “are going to make a judgment this fall not based on charts and data but based on how they feel about their jobs and paychecks.”

Eager to recast the public’s view of the economy on the positive indicators while acknowledging and responding to inflation concerns, Biden traveled to Iowa on Tuesday to showcase a new effort to lower gasoline prices, announcing that E-15 gas, with its higher ethanol content, will be able to be sold this summer.

The action, aimed at reducing the reliance on oil, follows Biden’s move last week to release millions of barrels of oil from the nation’s strategic reserves. With more than half of the 1.2% consumer price index gain in March coming from a surge in gasoline — and pushing up annual inflation to 8.5% — the White House has continued to characterize the trend as “Putin’s price spike,” casting blame on Russia’s president whose invasion of Ukraine has roiled global energy markets.

High prices for gas, along with food, have overshadowed a U.S. economy that, by most measures, has performed remarkably well in the face of a long pandemic and the most worrisome conflict in Europe since World War II. In Biden’s first two years in office, the creation of new jobs, household spending and business investments have all expanded at a robust pace. Overall economic growth last year was the fastest since 1984.

But none of that has translated into strong public support for Biden. Instead, the president’s dismal approval rating — mired in the low 40s — suggests he has led the nation to the brink of recession or worse. At least one recent survey revealed that Americans, for the most part, believe the U.S. lost jobs in 2021. The economy actually gained a record 6.7 million jobs.

“There’s not a single indicator that a recession is coming,” said Justin Wolfers, an economist at the University of Michigan. “Every measure of economic activity shows growth. We’re running out of jobless people — a generation of economists would have dreamed of that. In normal times, we’d call this a boom.”

But, Wolfers acknowledges, these are not normal times.

“We’re emerging from a pandemic, there’s a war on the news, it still takes six months to get a dishwasher,” he said. “If you think about where we are compared to two years ago — there’s no fear now of a great depression, there’s job growth, rising wage — you’d have to feel better about the economy. But we’re living through a generationally scarring moment. Things still feel so precarious, so it’s understandable people would feel a greater sense of economic risk, like their prosperity is fragile.”

Although the Federal Reserve, not the president, is charged with controlling inflation, Biden and Democrats are the ones who will take the political lumps, especially given the expectations Biden set upon taking office 15 months ago.

“Is it that Biden is doing such a bad job? No. It’s that he promised the country that by electing him things would return to normal,” said Peter Hart, a Democratic pollster. “And the pandemic rages on, there’s a war going on — people still feel stress.”

Moreover, he said, the crush of cataclysmic global events is complicating White House messaging efforts on the economy. “They’re actually in a position to make a compelling case about the economy once they can clear away the underbrush, but they can’t seem to get there. How do you focus on job growth or a Supreme Court nomination with everything happening in Ukraine and gas prices out of control? The bad news overwhelms the good news.”

Not only is the U.S. economy substantially outperforming most other advanced economies, experts say American households and businesses are in good financial shape. While food and gas inflation, in particular, will pinch lower-income individuals, “we do feel they have the financial buffers to weather the storm,” said David Tinsley, senior economist at the Bank of America Institute. Thanks to unspent money from the pandemic fiscal stimulus, he said, the average B of A customer still has $1,500 more at his or her disposal than before the pandemic.

However, runaway inflation has hit almost everyone in an immediate and highly personal fashion, whereas job growth matters mostly to the unemployed or underemployed.

After decades of almost no inflation, the explosion of prices for everyday necessities have come as a shock. The Fed’s sudden swing to raising interest rates, while generally considered sound economic policy, is translating into higher borrowing costs for houses, and economists are worried that the Fed’s course could end up tipping the country into a recession.

The war in Ukraine has also unsettled public confidence in a safe and stable future, especially after Putin raised the possibility of resorting to nuclear weapons.

With more than two full years before the next presidential election, the Biden White House can draw hope from the appearance of a few green shoots that are beginning to emerge on the inflation landscape.

Prices of big-ticket items, like cars and trucks, were major factor in the inflation run-up last summer. But over the last month, prices for used vehicles dropped and only rose a little for new ones. Global oil prices have trended lower this month — to around $105 a barrel, after spiking to about $130 in March. The average price for regular gas nationally was $4.098 a gallon on Tuesday, down from $4.326 four weeks ago, according to the American Automobile Association.

That means inflation could decelerate in April, although analysts warn that the Ukraine conflict could lead to further energy shocks.

Tuesday’s inflation report also showed some broadening of inflation in services as the economy emerges from the worst of the pandemic. The price of airline tickets, for example, soared over the month.

The index for shelter, the single biggest component of the consumer price measure, rose 0.5% over the month, the same as in February, and was up 5% from a year ago. Price increases slowed for women’s clothes and footwear, as well as for education and personal services.

“We are now at a mixed point in time, where the COVID reopening economic boost should start to slow, which in theory should help to calm inflation,” said Nancy Davis, founder of Quadratic Capital Management, although she warned of persistent supply chain problems that could keep inflation high.

Price increases for food showed no signs of letting up in March. And like gas, that tends to have an outsized role in shaping people’s psychology about inflation.

Although much is outside Biden’s control, analysts say the administration could do still more to help bring down gas prices a bit, like providing incentives for people to take mass transit or giving tax credit to consumers for reducing driving, said Dean Baker, senior economist at the Center for Economic and Policy Research.

Baker thinks Biden isn’t getting the full credit for the strong economic recovery because the media are focused on covering inflation. Rising costs have also been featured by Republicans seeking to damage Biden and Democrats.

At the same time, Baker contrasted Biden’s messaging with former President Donald Trump’s frequent statements that everything was always great. “Biden’s team has been far too willing to concede things,” he said.

What the Biden administration needs, Baker said, is someone who can toot its own horns successfully, someone like James Carville, a Democratic political strategist who helped Bill Clinton in the 1990s. “It would be great if the (Biden administration) had a Carville constantly pushing the line, ‘Look what we did, look what we did.’ They just don’t have anyone like that.” 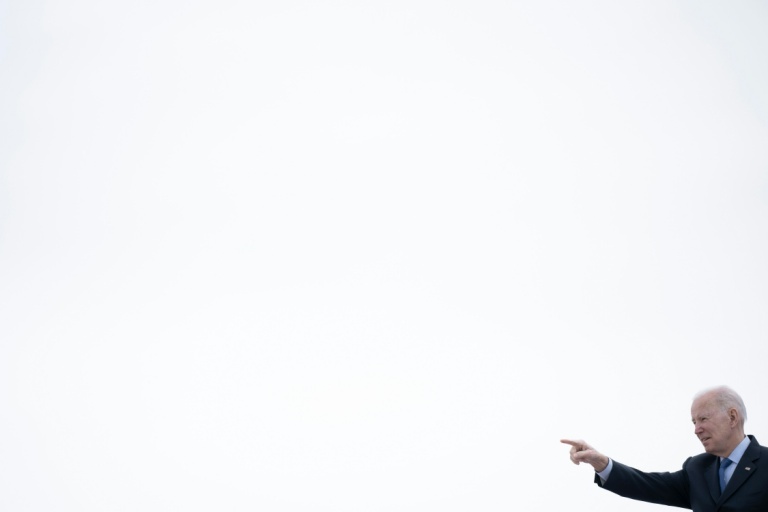 For Biden's battered approval, 'nothing else matters' like inflation
Washington (AFP) - Historically low joblessness is the kind of thing American leaders dream of, but President Joe Biden also…

AFP
One subscription that gives you access to news from hundreds of sites
No end in sight for spiking prices? Enter the ‘peak inflation’ crowd

In recent days, economic forecasters have said that the March inflation number — an 8.5 percent surge over last year…

Plus: Why high inflation is getting more attention than low unemployment, how to make supply chains more resilient, and more...