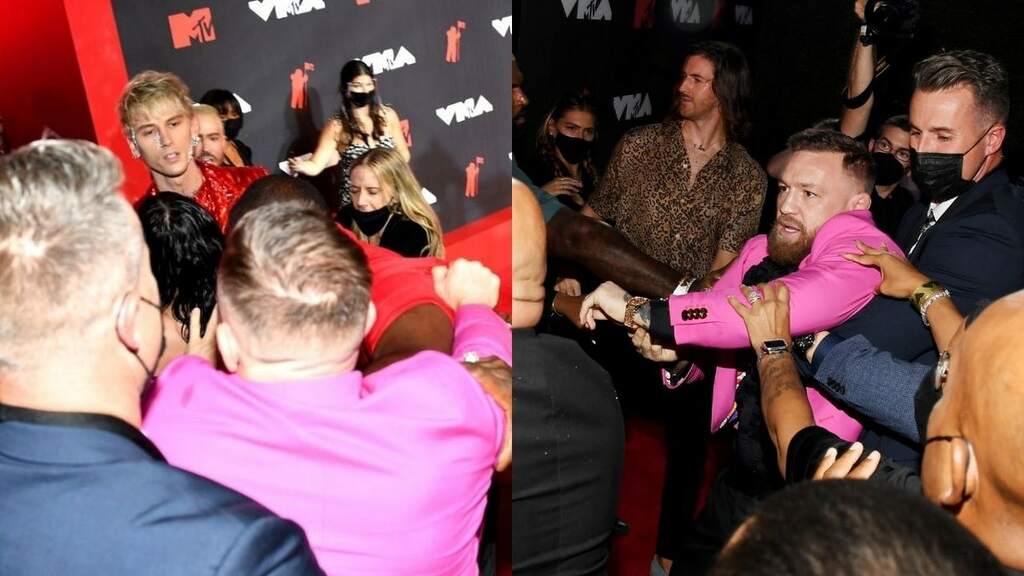 Crikey mates, the 2021 MTV VMAs haven’t even been on for that long and already a fight has broken out on the red carpet. You let the celebrities out of their cages for one day and they go fkn wild, apparently.

Yep, you read that correctly, a little tiff broke out on the carpet between professional boxer and martial artist Conor McGregor and American rapper Machine Gun Kelly.

What is the relation between these two people? Nothing. Why was the tiff started? Who knows, but the pictures of the almost-brawl are truly something.

According to Page Six, Conor McGregor allegedly started the fight by tossing his drink at MGK, which was shortly followed by security getting involved and a whole scene starting.

“They scuffled then it settled down and Conor went for him again,” a source told Page Six.

“[Photographers] were going to boycott Conor because they were worried MGK and Megan wouldn’t walk.”

Representatives for McGregor have since denied that the fight happened, claiming that “Conor only fights fighters.”

I guess I’ll let the pictures speak for themselves when it comes to that.

Machine Gun Kelly arrived at the 2021 VMAs with his girlfriend Megan Fox to perform his new single with Travis Barker ‘papercuts’. They both looked absolutely stunning, and you can gawk at the pics here.

Conor McGregor, on the other hand, was invited (for some odd reason) to present the award for Artist of the Year. He’s never stepped foot into the music world before, so it’s definitely an odd choice, but hey, this is MTV we’re talking about. Ridiculousness is their shtick.

It’s not clear as to why the alleged fight even started to begin with, as the two don’t really have any noted beef. I mean, they have barely even crossed paths before.

MGK was even seen attending McGregor’s UFC 260 fight with Megan Fox for a little date back in March, but that’s the only real connection one can make between the two.

Here are some more pics, because they’re so wild.

One cheeky guest even caught some footage around the time that the alleged fight broke out, and it makes for some interesting viewing.

why mgk and connor bout to fight. #vma pic.twitter.com/cMMT7CuPNN

If you need me I’m going to be drawing up theories as to why the hell this tiff even happened in the first place.