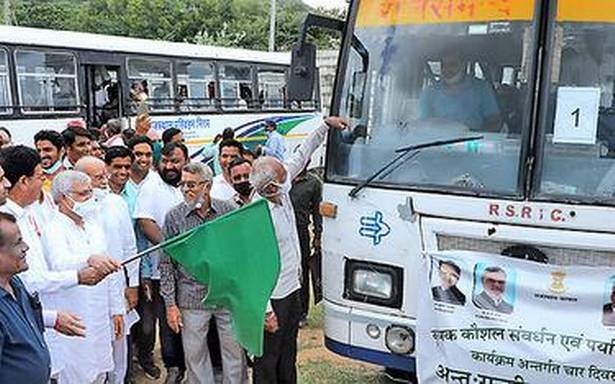 Over 400 farmers from Rajasthan’s Rajsamand district have been exposed to modern agricultural techniques and progressive farming during the tours to different areas in the State. Farmers were taken to some of the leading institutions under a pilot project for skills development and environment protection.

The project was based on the concept of “observe, learn and perform”, with the focus on growing crops with lesser input costs. Farmers were taken in several groups to the agricultural universities and institutions, where they interacted with experts and progressive agriculturists and observed the techniques being implemented in the fields.

Assembly Speaker C.P. Joshi, who represents Nathdwara constituency in Rajsamand district, flagged off the farmers groups at Damodar Stadium in Nathdwara last week. He said the tours were a step towards the empowerment of farmers living and working in the district’s remote villages. The knowledge and practice of new techniques would enable them to get remunerative prices for their produce, he said. Different groups were taken to Jaipur, Ajmer, Udaipur, Kota, Bhilwara, Sawai Madhopur, Jodhpur and Chittorgarh districts. The kits of improved varieties of seeds, vegetables and fertilisers were distributed to the farmers with small landholdings.