Rain will continue in parts of Tamil Nadu till October 13 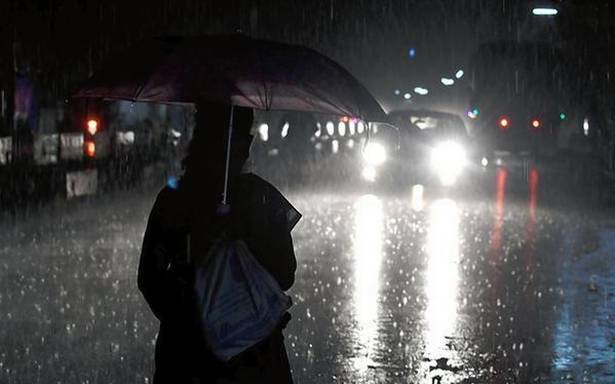 Rain will continue to lash many parts of the State for three or four more days. The Meteorological Department has predicted fairly widespread rain over Tamil Nadu.

On Saturday, humid, hot weather in Chennai translated to thunderstorms in many areas by the evening.

Dark rain clouds that hovered over the city brought evening thunderstorms in several areas, including Egmore, Taramani, Vadapalani and Meenambakkam. While MRC Nagar received nearly 4 cm, Nungambakkam recorded 1 cm of rain by 5.30 p.m. Some other weather stations in Chidambaram (3 cm), Hosur and Yercaud also experienced light rain by the evening.

S. Balachandran, deputy director of Meteorology, Chennai, said strong westerlies would trigger convective activity and thunderstorms over the State, particularly in the hilly regions and the northern districts. Southwest monsoon is yet to withdraw completely, and is expected to gradually retreat from other parts like Gujarat and Madhya Pradesh in the next few days.

Though a low pressure area is likely to form around Sunday, it may not have any direct impact over the State, as the weather system is expected to move towards Odisha.

This October has so far seen good rainfall, with the State receiving an overall 8.4 cm against its quota of 4.3 cm, he added.

Similar weather pattern may continue over Chennai with thunderstorms and moderate rain likely to occur in some areas. The city may experience a maximum temperature of around 34 degrees Celsius till Monday, officials added.