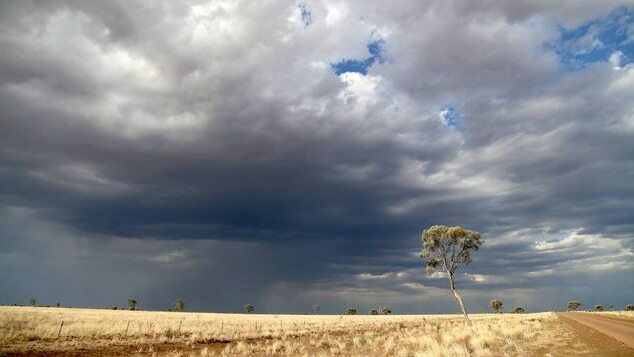 The Bureau of Meteorology has said parts of outback Queensland are set to be drenched with significant rainfall expected in the coming days.

The bureau said a trough over central Australia will move towards Queensland's west over the weekend, before steadily progressing eastwards early next week.

"We're looking at a trough feature over Central Australia that's going to move into the far west of the state later in the weekend," Mr Hanniffy said.

He said daily totals of up to 33 millimetres were likely to be widespread across the region, while more isolated rainfall of up to 45mm was expected for some areas.

'A month's worth of rain'

Mr Hanniffy said parts of the west, southern and central interior could get up to a month's worth of rain on Monday and Tuesday.

"Even parts of the Channel Country which ... could see up to three times their monthly average," he said.

October usually has a monthly average of less than 10mm of rain in the far south-west and less than 25mm in the central-west.

He said areas in the central-west such as Mt Isa and Cloncurry were set to receive up to 30mm of rain.

Towns in the southern interior such as Charleville were also expected to see a month's worth of rain over the weekend.

"The system will move down towards western Queensland from Sunday before moving east across the interior and eventually into the south-east as you go through Monday and into Tuesday," he said.

"We've still got very hot conditions, particularly above the northern interior and we've seen some kind of early season records here with temperatures hitting the low 40s in early October rather than what you normally expect in late October," he said.

"It's going to remain hot over the next two days but as that weather system comes in, there's quite a bit of cloud coming with it so areas that might see low 40s on Saturday and Sunday will drop right back to 30s or even mid-20s."

He said cloud cover will move towards the south-east on Tuesday, cooling temperatures across the Brisbane region.