Raiders winners and losers in wild OT win vs. Ravens 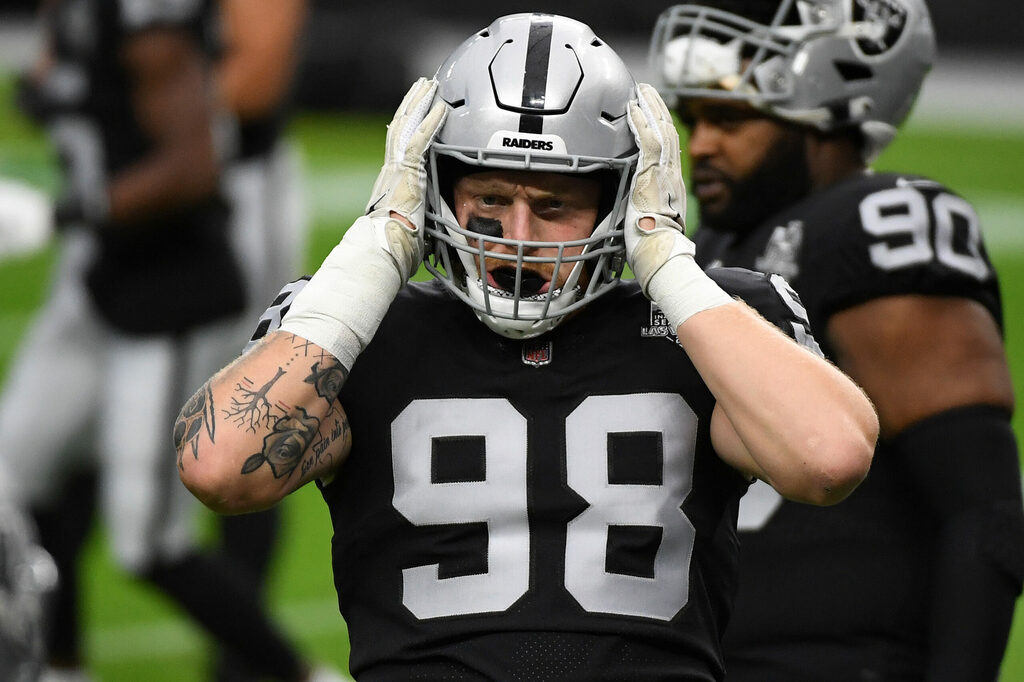 The Las Vegas Raiders won an absurd, thrilling ballgame on Monday night against the Ravens, coming back from a 17-10 deficit in the fourth quarter to eventually prevail in overtime, 33-27.

The Raiders defense held its own, putting consistent pressure on Ravens quarterback Lamar Jackson. The group even caused a couple of fumbles, each of which turned into Raiders touchdowns, including QB Derek Carr’s game-winning toss to wide receiver Zay Jones.

With a dazzling array of big plays and memorable moments, there were plenty of options for each of this week’s winners and losers. Here are the players that made the cut.

The Raiders veteran QB personified the fighting spirit that this year’s squad has been determined to implement. He had a couple of near interceptions early on and went on a cold streak for much of the first half, but he kept trying to make plays. Eventually, he made a bunch of them.

Without much of a rushing attack at all, Carr ended up with 435 yards on 34-for-56 passing, including two touchdowns and one interception. The INT wasn’t all his fault, either (more on that later).

Carr also dealt with an offensive line still finding its way, and he willed his young receivers Jones, Henry Ruggs III and Bryan Edwards into making plays down the stretch. It was true leadership on display for the fans at this historic game at Allegiant Stadium.

Defensive end Maxx Crosby provided a pass rush rarely seen on the Raiders in the last two decades. He was simply marvelous, impacting Jackson’s pocket nearly every time the former MVP dropped back to pass.

He finished with multiple sacks (two total, according to the latest count by ESPN), two tackles for loss and five QB hits.

Crosby made an impact just by getting blocked at times, too. Most importantly, extra attention paid to Crosby helped DE Carl Nassib get to Jackson and force a fumble in overtime. The Raiders recovered and made good on their second opportunity in the extra period, scoring the TD to Jones.

This defensive line… All heart.

Carl Nassib's forced fumble puts us back in business. Live on @espn pic.twitter.com/kG1gLqxMeT

While it took the Raiders wide receivers, besides Hunter Renfrow, a long time to get going, tight end Darren Waller was his dominant self throughout the contest.

He finished with 10 receptions for 105 yards and a touchdown, which tied the score at 24 late in the fourth quarter. Carr targeted Waller an absurd 19 times, and each play appeared as though it could have been completed with slightly better execution from Carr and Waller.

It seems nobody can stop the Carr and Waller combo besides themselves. And even when they can’t connect on every pass, the results are extremely productive and overwhelm the opponent.

The Raiders new center had a ton of trouble against the Ravens’ oversized front, including multiple holding penalties. The issues started early when James was called for holding on the Raiders’ first drive. The march had started with promise, thanks in part to a 31-yard run by backup QB Marcus Mariota.

After his holding penalty, James appeared to snap the ball prematurely, causing Carr to fall on the loose football well outside of field goal range after Las Vegas was previously in a position to score a touchdown.

James will have to improve rapidly as the season progresses. Luckily for him, his teammates and coaches had his back and overcame his shortcomings.

Wide receiver Willie Snead IV ends up on this week’s losers’ list thanks to one bad play. But if the Raiders had lost, the play would have lived on in infamy.

With the Raiders having already seemingly won the game on an Edwards TD reception on Las Vegas’ first drive in overtime, the play was reversed after review. Las Vegas again faced a goal-to-go situation to win the game.

In the face of a fierce pass rush, Carr went to Snead on a 3rd-and-goal from the 5-yard line, but the football went through Snead’s hands and after being tipped into the air, was grasped by Ravens cornerback Anthony Averett. Luckily for Snead and the Raiders, Nassib forced his fumble and Carr worked his magic with Jones.

While linebacker Cory Littleton had a decent game overall, finishing with 10 tackles (five solo), his role in perhaps the Raiders’ worst defensive play of the game earns him a spot on this week’s list.

It was the first of multiple tense short-yardage situations in this memorable contest. With the score tied at zero in the first quarter, the Ravens faced a 4th-and-1 from Las Vegas’ 35-yard line, and they went for it.

The Ravens got all 35 yards for the game’s first score, running right up the middle to paydirt. Littleton took an awkward angle and tackled only air, letting running back Ty’Son Williams jog nearly untouched to the goal line.

Other Raiders got abused on the play, too. But that was after Littleton’s whiff. Thankfully, the defense kept fighting all game long and recovered to earn the big win.