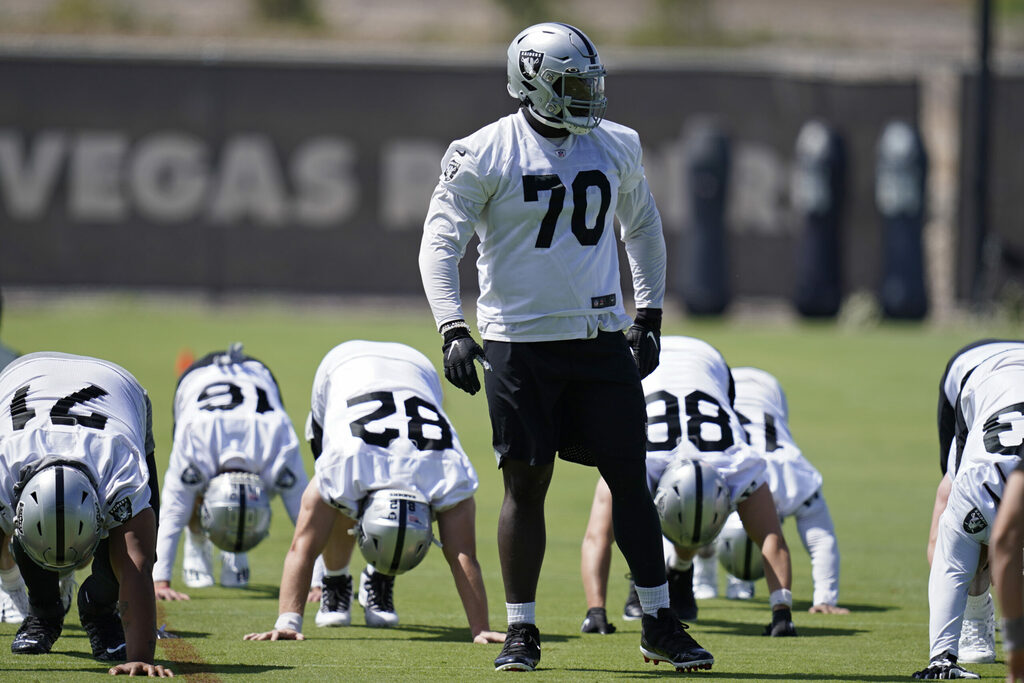 It’s been a rough first four weeks of the season for Alex Leatherwood to say the least. He has given up four sacks and six penalties — both lead the league. When he’s not giving up the sack, he’s giving up a lot of pressures and hits on Derek Carr. Not to mention stuffs in the run game.

This has prompted the Raiders to start working him at the guard spot this week as they prepare to face Khalil Mack and the Chicago Bears.

“We’re still looking at trying to find different ways to get our five best guys on the field,” said offensive coordinator Greg Olson. “We moved some different guys around, to be honest with you, we moved a couple guys in there. Just trying to find that combination.”

With Leatherwood working at right guard, fourth-year tackle Brandon Parker worked at right tackle. The former third-round pick has garnered praise from his coaches as being a third starter of sorts, so now he gets a chance to prove it.

Parker has been slow to develop at the tackle spot and has been given several opportunities in the past to step up and take the job and has yet to prove he is a reliable option.

Olson added that Leatherwood’s experience at both guard and tackle allows them to experiment. Moving players around “trying to find the five best.”

Leatherwood was drafted in the first round to play right tackle. Though most pre-draft scouting reports on him suggested a move to guard due to run blocking being where he did his best work.

The Raiders needed him at right tackle after trading away Trent Brown. Then the team lost both starting guards early in the season and the interior has struggled to create holes and get a push in the run game.

Richie Incognito went down prior to the start of the season and John Simpson has started at left guard in his absence. Right guard Denzelle Good was lost after 17 snaps in the season opener and the starter has been journeyman Jermaine Eluemunor ever since.