Jammu and Kashmir Lieutenant Governor Manoj Sinha on May 15 ordered an inquiry into the use of force against the Kashmiri Pandit employees who were protesting the killing of Rahul Bhat.

Protests were held at several places in J-K against the killing as well as against the “failure” of the administration to provide security to the Kashmiri Pandit employees. Police used batons and tear smoke shells at Sheikhpora in Budgam on Friday to quell the protest.

The government has ordered an inquiry into Bhat’s killing and a Special Investigation Team (SIT) has been constituted.

“Bhat’s murder was a targeted killing and an attempt has been made to create an atmosphere of fear and terror. Bhat was a very good employee. We have constituted an SIT over the issue. The SHO has been attached. The SIT will investigate all the angles,’ Mr. Sinha said here.

Mr. Sinha said the SIT will also inquire into the use of force on the protestors.

“The force which was used will also be investigated. In one week’s time, their posting will be done in safe and secure places. They have some other grievances and those will also be looked into. We understand their pain and difficulties,” the LG said, adding, that the administration will make arrangements for full security wherever they live.

The LG also said he has directed the administration that there is no need to use force. Bhat, who had got the job of a clerk under the special employment package for Kashmiri Pandits in 2010-11, was gunned down by terrorists inside the tehsil office in Chadoora town on May 12.

The LG appealed to the Kashmiri Pandit employees to keep patience for some time, assuring them that all their issues will be resolved.

Mr. Sinha said some people were trying to disturbing peace in Kashmir, but the administration “is taking the issue very seriously”.

“I appeal the politicians and political parties as well as common people that this is the time to stay together so that the peaceful atmosphere remains. Some people are trying to disturb the atmosphere, but I want to tell them that their attempts will not succeed. Two foreign terrorists involved in the incident have been killed and the police is after the others,” Mr. Sinha said.

Mr. Sinha said the administration is sensitive to the issue and will make every attempt to resolve their issues.

“I appeal all the political parties that to issue an appeal for social boycott of such elements involved in these (killings) incidents ,” Mr. Sinha said. 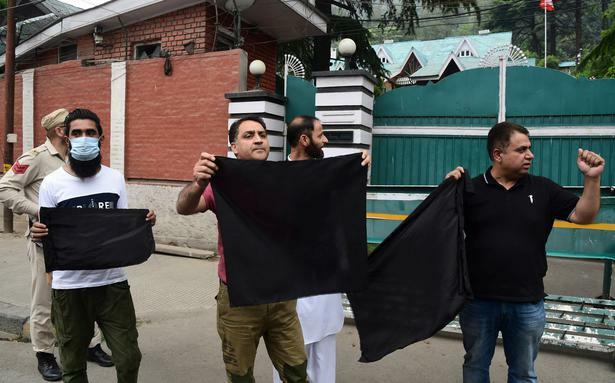 Gupkar alliance meets J&K L-G, inquiry ordered into use of force against Pandits
J&K Police had fired smoke shells and used batons to disperse Pandits protesting against the killing of a Pandit employee…

The Hindu
One subscription that gives you access to news from hundreds of sites
PAGD urges Kashmiri pandit employees not to leave valley; Delegations meet LG, BJP raises security issue