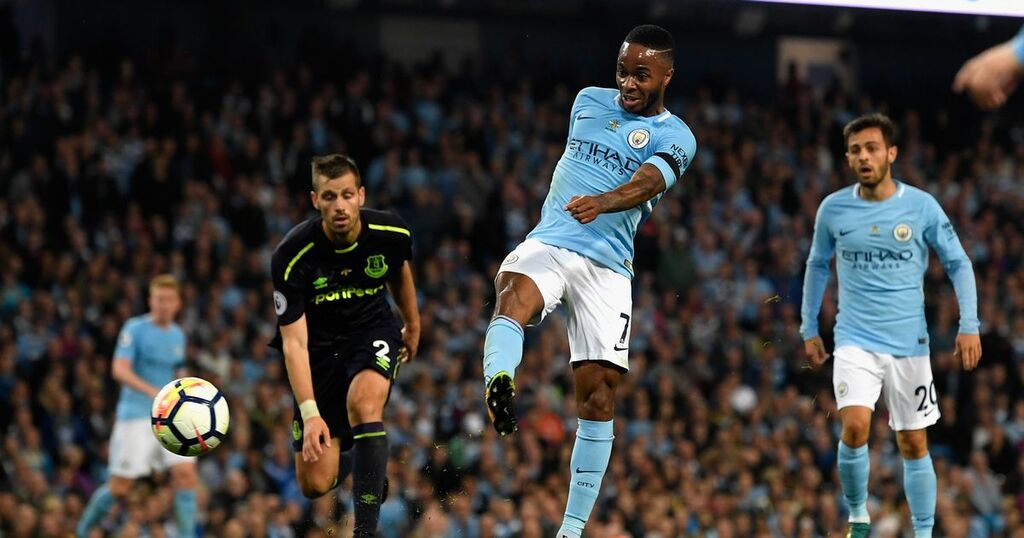 Pep Guardiola was in a largely relaxed mood as he previewed Manchester City’s return to Premier League action against Everton, even playfully bragging about his international break suntan.

But nothing puts years back onto the Catalan tactician’s furrowed brow like transfer talk.

Unfortunately for Pep, his boyhood club Barcelona are both skint and keen on Raheem Sterling, if you believe reports from his homeland.

This means plenty of intrigue, plenty of claim and counterclaim and presumed pieces to fall into place before January and beyond.

“Don’t ask me from now on until the last day of the transfer window,” he responded to a question about Sterling’s future.

“Our business, Raheem as well, is Everton, PSG and West Ham.

“I am not going to answer any question about the future.”

Now, if Guardiola was to actually refuse to answer any questions about the future, then the press conference as we know it would cease to work.

But you can see his point after the fitness update he had just offered.

Kevin De Bruyne will miss the Everton game and a midweek Champions League engagement with Paris Saint-Germain after testing positive for COVID-19. The playmaker’s 10 days of self-isolation means he is also unlikely to feature when West Ham visit the Etihad Stadium next weekend.

Given the tough schedule immediately ahead for his side, it feels very unlikely that Phil Foden or Jack Grealish will be risked against the Toffees having returned from England duty with knocks.

Although he would probably rather it had not come at the expense of colleagues and friends for club and country, opportunity knocks for Sterling.

The 26-year-old frustratingly failed to bring his blistering Euro 2020 form into this season with City and finds himself down the pecking order.

Grealish has operated in his favoured left-wing role for most of the season, with Foden excelling there in the Manchester derby as he did in the 2-2 draw against Liverpool.

At Anfield, Sterling came on as a second-half substitute on the right-wing, although Gabriel Jesus has taken his chance impressively in that position, while Riyad Mahrez’s efforts from the same flank in the Champions League are a big part of the reason he is City’s top scorer.

Sterling’s path to a first-team spot has not looked so perilous since Guardiola opted to start a season without either of his favoured wide attacking roles in City’s chosen formation.

A rethink was swiftly called for when Kyle Walker was sent off on his home debut against this weekend’s opponents.

Everton were a goal to the good at half-time thanks to Wayne Rooney, who lapped up his customary Eastlands welcome, and Guardiola needed to change something.

He turned to Sterling, who came on for the start of the second period and performed in a typically tireless manner to help City make light of their numerical disadvantage before volleying home an 82nd-minute equaliser.

His reward was a place in the starting XI next time out at Bournemouth as Guardiola reverted to his trusty 4-3-3. Once again, it was not a vintage performance but Sterling’s deflected winner deep into stoppage time completely changed the momentum of his City career and the Guardiola tenure as a whole.

Although he then needed to serve a ban, having collected a second booking for apparently over-celebrating in the bedlam that followed as away fans poured onto the pitch, Sterling made himself more or less undroppable from that point.

In all competitions he scored 23 goals in 2017-18 for Guardiola’s centurions, improving that to 25 as City lifted a domestic treble the following season and Sterling was named FWA Footballer of the Year. Despite the Blues falling short at home and abroad, save for the obligatory Carabao Cup, Sterling had his most prolific campaign to date with 31 in a pandemic-disrupted 2019-20.

City’s probable weekend absentees mean Guardiola’s front three probably picks itself - Mahrez on the right with Jesus returning to number nine, giving Sterling a conventional centre-forward to play off from the left.

Just like Walker’s harsh red card versus the same opposition more than four years ago, Grealish, Foden and De Bruyne’s misfortune has granted Sterling an opportunity it feels like he must grasp as the clock ticks on his contract and future at Manchester City.