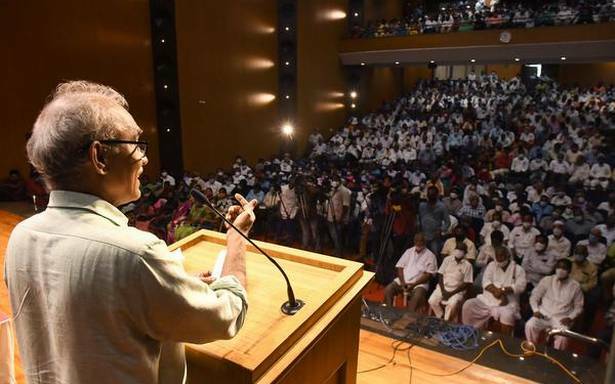 CPI(M) Polit Bureau member B.V. Raghavulu on Tuesday condemned the attacks on the party offices in Tripura and attributed it to the ‘fear of defeat among BJP leaders who could sense the brewing dissatisfaction among people against the Modi government at the Centre’.

Speaking at a public meeting here, the senior leader said there were clear signs of people’s disapproval of the government policies and the BJP was headed for a defeat in the next elections.

He said the CPI(M) was successful in obstructing the ‘communal politics’ of the BJP in Tripura. Unable to digest it, the party ‘goons’ went on an attacking spree and targeted the party offices, its leaders and cadres, he alleged, adding that such violent acts would not stop CPI(M) from taking on the ‘communal forces in the country’.

In the garb of privatisation and monetisation, the BJP government was handing over national wealth such as the railways, roads, gas pipelines, BSNL, oil companies, electricity sector, airports, ports, warehouses and stadiums to corporate bodies at throwaway prices, he said.

Mr. Modi’s ‘misrule’ had crippled the country’s economy and the outbreak of COVID-19 pandemic had worsened the situation. While other nations were gradually limping back to normalcy in the post-COVID situation, India made no progress, he alleged.

He accused the Modi government of total failure in terms of controlling the spread of coronavirus and cited the case of China where 69% of the population had received two doses of the vaccine, against mere 17% in India.

He said the Modi government had become ‘subservient’ to a few corporate bodies that were ruling the roost. On the pretext of the pandemic, the corporates had been making a fast buck by increasing the prices of essential commodities while the government remained a silent spectator, he alleged.