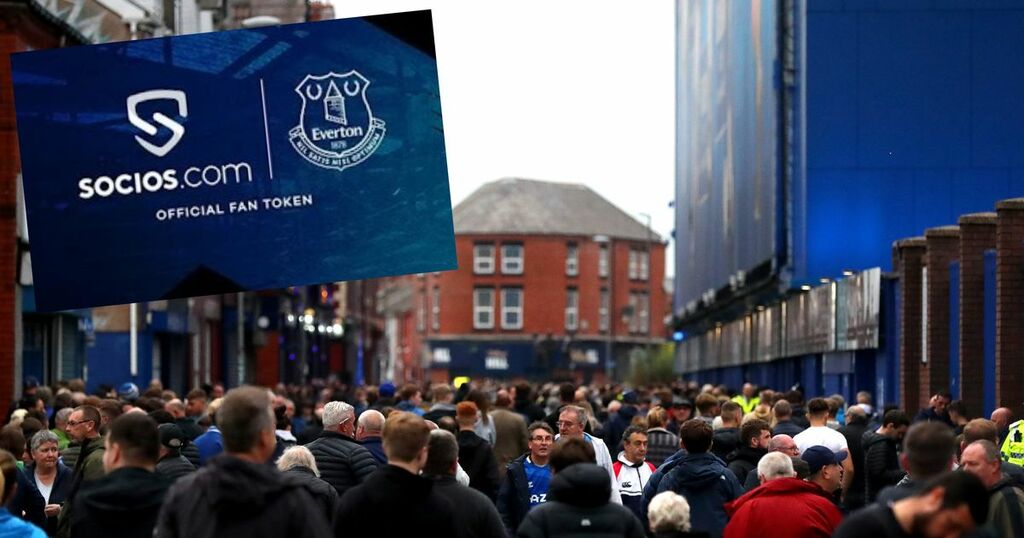 Everton have become the latest club to enter the 'fan token' space.

On Wednesday the Toffees officially launched their partnership with the firm Chiliz, a blockchain provider, where an $EFC Fan Token has been created for supporters to purchase from the Socios.com app, the aim to provide 'new experiences for Everton supporters across the world', allowing for token holders to have a say on club initiatives through online polls in a bid to engender a stronger connection with the club's global fan base.

Socios is the world's biggest fan token firm, having already partnered with the likes of Inter Milan, Arsenal, Paris Saint-Germain, Manchester City, Juventus, Leeds United, Aston Villa and AC Milan, among others. It has also entered into partnerships with sporting leagues internationally, including teams the NBA and the hugely popular UFC organisation, and has been leading the wave of firms entering into the sporting marketplace over the past 18 months.

The latest deal arrived on Tuesday when La Liga announced an agreement that will see Socios become the global fan engagement partner of Spain's top tier.

Socios, describes itself as a fan-engagement platform in which users can "be more than a fan" and influence decisions at their club.

Do not expect to make calls on picking the team or transfer strategy, though. In its most basic form users purchase fan tokens through a cryptocurrency called Chiliz and that allows them to vote on decisions such as pre-match music in the stadium or, in Barcelona’s case, what message should be on the captain’s armband.

"We are delighted to welcome Socios.com to the Everton Family in an innovative partnership that will help bring our global fanbase even closer to the club they love," commented Everton's commercial director Alan McTavish in the club's press release.

"With Socios.com, we will launch $EFC Fan Tokens that will provide supporters around the world with an opportunity to engage with the Club in a new and exciting way, including taking part in polls on Club initiatives. Socios.com are the recognised leaders in blockchain across the sports industry, and the introduction of $EFC Fan Tokens is an exciting opportunity that once again demonstrates the Club’s commitment to engaging with our global fanbase."

There has been some suspicion and mistrust around fan tokens in football over the past year, particularly from English fans, with the more deep-rooted traditions of fans being at the heart of their clubs, intertwined with every aspect being a driving factor.

Last month the Arsenal Supporters’ Trust said that they "have raised genuine concerns around monetising fan influence and player protection" with the club, while in 2020 pressure from West Ham United fans saw the club and Socios part ways before a fan token had been sold following the announcement of their partnership. The wisdom was questionable in launching a monetised fan engagement app at a time when supporters were at odds with their ownership.

Since Everton announced their partnership with Socios last week there has been more suspicion and questions raised. The club, to much credit, compiled a full Q&A on their website in a bid to allay fears that supporters had over the deal, and to explain how it will work in more detail.

Worries over the monetisation of fan engagement, access to match tickets and the potential for exposing some to financial hardship, with an investigation in The Athletic in August stating that Socios had previously claimed that the Chiliz cryptocurrency used to buy fan tokens was "only suitable for financially sophisticated persons."

After the West Ham deal with Socios was ended last year, the Football Supporters Association's chief executive Kevin Miles said: "The Socios model attempts to monetise fan engagement which the leagues and clubs have committed to doing for free.

"There should be no financial barriers to engaging with your football club."

There have been concerns over the model and Socios' increasing prevalence in the marketplace.

With regards to Everton's own partnership with Socios, the club are adamant that they have come at this from a low risk perspective, with the ultimate aim of the more limited nature of their deal to try and engage with their growing global fan base.

The ECHO understands that the club engaged with fan representatives at the start of the process and performed due diligence on Socios having been approached by a number of crypto firms offering fan token experiences.

While it is aimed at increasing engagement with a supporter base who are far away it is, ultimately, a commercial deal for Everton. Football has been moving at pace into the crypto/fan token space and Everton have moved with it, although there are more guardrails built in to their own partnership that some others.

When Lionel Messi signed for PSG last month it was a deal that was full of intrigue. And one of the most intriguing parts of his signing was that part of his signing on fee had been paid in fan tokens through Socios, where the value of the tokens rises and falls in valuation.

Fans bought into it in a big way in the build up to Messi's signing in Paris, but when the deal was done the days that followed saw the price that had been driven up tank and fans losing money on their tokens.

PSG's Socios deal is commercially more aggressive and there aren't hard caps on how many can be bought by an individual. They are traded like shares on the New York Stock Exchange and fluctuate in price on a daily basis.

Everton, who will provide one free token to existing season ticket, hospitality and official members for 'a limited time', are selling individual tokens for £2, with the maximum amount allowed to be bought by an individual being 75 from the opening Fan Token Offering (FTO) and 175 after that.

"By capping the number of fan tokens that each user can buy during our FTO we are able to allow as many fans as possible access to the in-demand $EFC Fan Tokens at a low, fixed price," the club explained on its official website.

"$EFC Fan Tokens are digital collectable assets and are yours to keep for life. Much like receiving a signed shirt or piece of Everton memorabilia. The only difference is that your $EFC Fan Token brings you closer to Everton through a range of polls, money-can’t-buy experiences, competitions and quizzes.

"While supporters are encouraged to keep and cherish their collectable $EFC Fan Token(s) as well as being reminded that the intention of purchasing the digital tokens as fans is not around trading, should you really want to sell your token you can list it for sale and trade it through the Socios.com app.

"This would involve converting the token back to $CHZ and then back into your chosen currency. Please note there may be a minimum limit on withdrawals and remember that the price of your $EFC Fan Token is dependent on supply or demand, it can therefore go up as well as down. Supporters are advised to only spend what they can afford and also seek independent financial advice if required."

The last point is something that has been one of the concerns raised, where it opens up the potential for individuals to get into financial distress.

Owning more than one fan token does allow for greater weight with regards to the online polls or quizzes, but the limit on how many can be bought and their low value meaning there would be little financial benefit to selling and trading them, especially with far more open crypto trading platforms that they would be able to engage in should they be looking to make a profit on tokens.

There have also been questions over the monetisation of fan engagement, something that was also put to the club by the ECHO.

The club stated that the 'fan experiences' that have been detailed would be coming from Socios' own entitlement as a commercial partner, so where 'match tickets' are referenced they would be perhaps one or two matches in the season that Socios had hospitality tickets for that could have gone to executives. The difference here is that they will be made available for competitions and fan experiences to be won via the Socios app.

During the FTO, 500,000 will be made available with a view to 10m being on the market. According to CityAM, for teams, the incentive is a 50/50 split of revenue when their tokens are sold or traded.

Ultimately this is seen by the club as a method to try and find a way to monetise their relationship with a global fan base and strengthen the sense of belonging that long distance fans have with the club. But the offering of free tokens to groups in the local fan base has been designed to be inclusive.

Everton's approach has been a cautious one with Socios. Football is set to adopt fan tokens in a big way over the next year and the Toffees are testing the water.

The scepticism over just what it all means and the uneasy links to a still largely unregulated industry that carries risk won't disappear any time soon, especially as Socios' influence continues to grow across the game. The emphasis seems to be on engaging with the online fanbase of clubs rather than the match-going supporter. How that translates into making the most, commercially, of a fanbase around the world, one that has been steadily growing for Everton and been a focus for a number of years, remains to be seen.

“Some may find our polls gimmicky,” said a Socios spokesperson told The Athletic last month.

"But those millions of remote fans who until now had no way whatsoever to actually feel part of the clubs surely appreciate the new opportunity that we are creating for them.

“Are ‘normal fans’ those who buy season tickets to attend the stadium every week or those that live thousands of miles away? We have nearly 1.5m users from 150 different countries around the world."