Queensland will soon be home to the world's largest green hydrogen manufacturing facility. Here's what that means 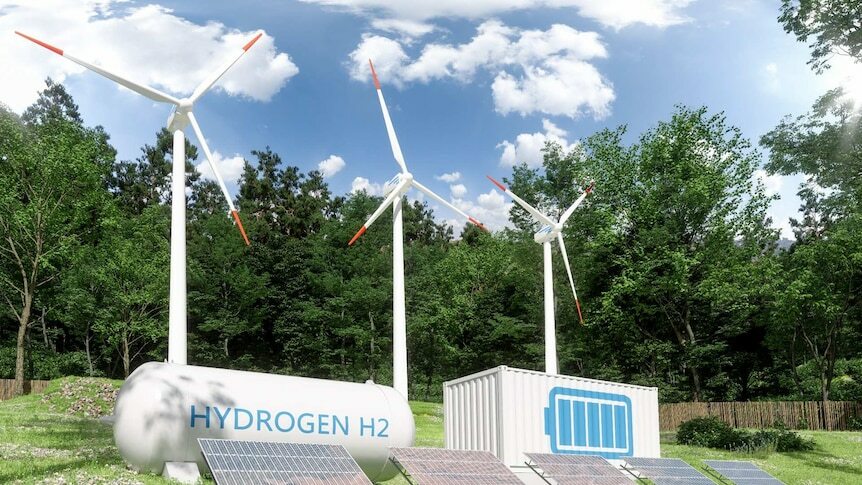 It is expected to make Queensland a "renewable energy superpower".

The facility has been heralded as a "breakthrough" for Australia's green energy market, with predictions the plant will double green hydrogen production capacity across the globe.

As part of a trial, a new plant will produce green hydrogen that will then be turned into green ammonia — a compound Mr Forrest described as a "zero-pollution" fertiliser.

So what actually is green hydrogen? How does it work? And what on Earth is an electrolyser?

Let's go back to basics. Here's a quick breakdown of all your science questions:

How does green hydrogen work?

Hydrogen is an element that can be found in water and the atmosphere.

It has long been described as the fuel of the future, the energy source that could bring the world to net-zero emissions.

It's cheap and clean-burning. It's also the most abundant element in the universe.

However, on Earth, hydrogen doesn't appear pure in nature and requires energy to separate it from other elements.

The most common way to separate it is to extract hydrogen from water, which is two parts hydrogen, one part oxygen (hence H2O).

That's where electrolysers come in.

This is the device used to extract hydrogen from water.

This happens when an electrical current is passed through a tank of water, separating hydrogen from oxygen in a process known as electrolysis.

If the electricity is generated from renewable sources, such as solar or wind, the hydrogen emits a vapour that has no carbon footprint.

At this stage, it's unclear whether FFI will use solar or wind to renewably power the electrolysers.

So, to recap, green hydrogen is essentially hydrogen made without fossil fuels.

Once that green hydrogen is produced, it can then be burnt to produce heat or fed into a fuel cell to make electricity.

What will this hydrogen manufacturing facility produce?

Mr Forrest said the first stage of the project will be a hub that will build green energy infrastructure and equipment, such as cabling and wind turbines.

More importantly, it will manufacture electrolysers.

The facility is destined to be built on Queensland government-owned land near Gladstone in Central Queensland and is the first stage of a six-step, $1 billion-plus operation.

"FFI will construct a facility with an initial capacity to manufacture up to two gigawatts of electrolysers annually," he said.

That renewable hydrogen energy will then be exported from Queensland to countries around the world.

How much will the facility cost?

Mr Forrest described the overall operation as a "$1 billion-plus" investment.

The first stage of the six-step project is to build the facility near Gladstone. That will cost about $115 million.

According to Queensland Premier Annastacia Palaszczuk, this major investment also has the potential to create thousands of skilled jobs in regional areas.

Ms Palaszczuk said the plant was initially expected to generate more than 300 local jobs for the Central Queensland region and "thousands of jobs" into the future.

The Palaszczuk government last year announced a $10 million fund towards hydrogen investment, in addition to an earlier $15 million pledge.