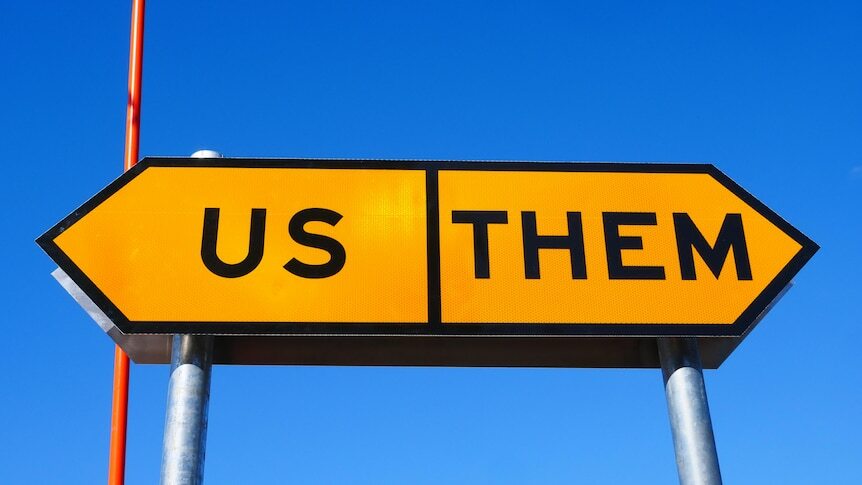 There is a new border barricade on the Gold Coast, but rather than separating Queensland from New South Wales it divides "us and them".

It is part of the Swell Sculpture Festival on Currumbin Beach and locals are using it to vent their frustration about the border restrictions using blackboard and chalk.

Delmimitation artists Blair Garland and Russell Solomon said responses had ranged "from sad to safe" with many "grumpy about border closures and government restrictions".

"It is really an emotional thing for a lot of people," Solomon said.

"A European woman was in tears, she has not been able to visit family.

"Yet there is plenty of love to match in a sculpture festival where people can get up close and personal.

"We want everybody to interpret our signs and our whole work however they want to," she said.

"It came from discussions between Russ and I about the old world versus the new world."

"Three months in the making, I started with a timber frame and then steel," he said.

Blake said Swell's outdoor gallery allows people to "get up close and personal"."

I always want people to engage as opposed to, in the past, people go to a museum and it's 'look don't touch'," he said.

"I encourage people to climb and walk up into [Monolith]."

Artist Miles Allen has also embraced an interactive approach, asking people to leave a message of love on his installation, 15,000 Declarations of Love.

"It's fallen sticks which I've gathered and placed in the shape of a heart," he said.

"Some people are doing it really hard and this is an opportunity for some love to get out there and people to express their love.

"Hopefully people will walk away it from feeling the love, feeling happier, and feeling a bit more compassionate."

Currumbin local Maddie said the sculptures "show what Currumbin has really got to offer".

"Definitely feeling for people over the border. Makes us a little bit more grateful that we have it at our doorstep."

Her friend Bronte said she hoped it gave more people a reason to visit local businesses.

"It brings a lot of people from further north, even up at Mermaid [Beach]," she said.

Queensland Premier Annastacia Palaszczuk has announced that a restricted border bubble will be implemented on Monday.