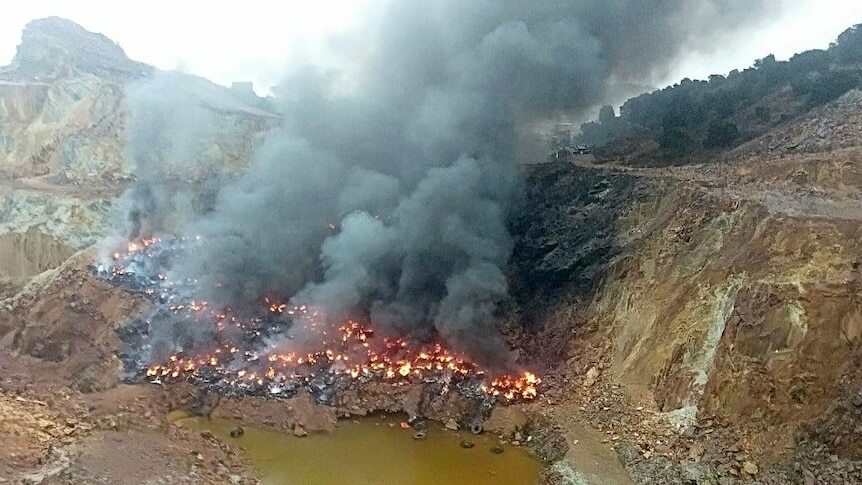 A fire among thousands of car and truck tyres at Mount Lyell mine, outside Queenstown on Tasmania's west coast, is being treated as suspicious.

Three fire crews were called to the fire shortly after 12:30am overnight and found the tyres on fire in a 500-metre deep gully.

Authorities initially advised Queenstown residents to remain indoors in case the wind changed but now the Tasmania Fire Service (TFS) says there is "no threat to the general public".

"People who don't need to be in the immediate area should stay away [from the fire]," the TFS said.

Police said the fire was causing a significant amount of smoke in the area and the plumes were visible from town.

The TFS said the fire would burn for several days until it extinguished itself.

It is not known why the tyres were in a gully of the open-cut mine.

The TFS said it would not know what caused the fire due to difficulties accessing the gully, but have deemed the fire suspicious.

Fire crews have since left the scene and handed the incident over to mine management and the West Coast Council for monitoring.

The Environmental Protection Authority (EPA) has also been notified of the fire.

In a statement, the EPA said it expected weather conditions to keep the smoke clear of the township, and would remain on standby to deploy additional air monitoring equipment if needed.

"The EPA’s main role will be to see that waste materials from the incident are managed safely and do not cause environmental harm," a spokesperson said.

While the matter remains under investigation, the EPA said deliberately burning tyres was an offence under the Environmental Management and Pollution Control Act 1994.

Organisers of The Unconformity arts festival, which was due to begin in Queenstown on Friday,  said the fire would have no impact on the event.

But within hours the festival had to be cancelled because of a three-day Covid-19 lockdown imposed in southern Tasmania.