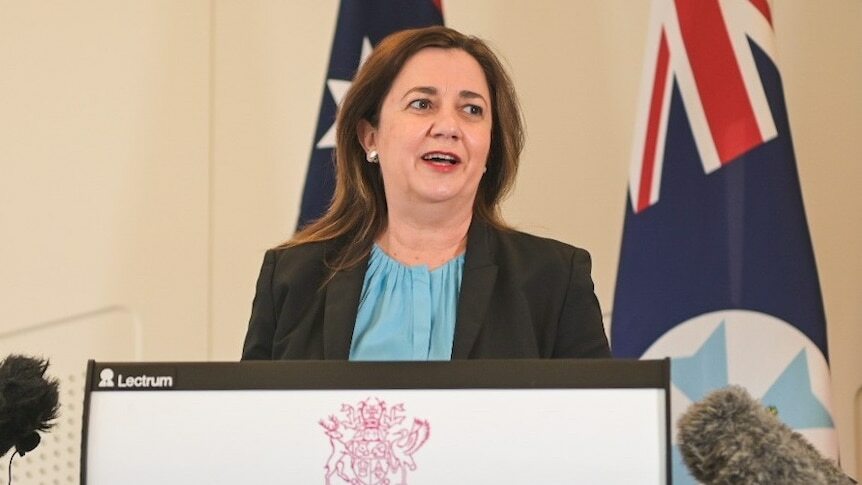 Queensland has recorded two new community cases of COVID-19 but authorities are confident those who tested positive were not exposed to the wider community during their infectious period.

In announcing the cases, Premier Annastacia Palaszczuk said neither were "of concern" to authorities worried about the potential spread of the virus in the state.

One case was a three-year-old girl linked to the state's recent aviation cluster who had been in home quarantine.

The second case was a 19-year-old woman travelling home from Victoria, and was only infectious on a flight before being intercepted on arrival into Queensland.

The woman was given an exemption to travel into the state and quarantine in a hotel.

Queensland's Chief Health Officer Jeannette Young also said she was not "too concerned" about the new cases but wanted to see more testing of anybody with symptoms.

"She received notification on the plane, on the flight up from Melbourne, that she was a positive confirmed case, and we were notified as well so we met her at the airport, and immediately transferred her to Royal Brisbane hospital for ongoing care, so she's not a risk to anyone," Dr Young said.

All travellers on the flight from Melbourne were already required to quarantine but contact tracers will notify people who sat near her on the plane.

"Just in case people are interested, that was flight JQ 562 from Melbourne [on Monday]," Dr Young said.

No cases found were linked to the massage worker whose case was announced on Monday.

Dr Young said contact tracers were still working to identify all contacts of the woman in her 50s, who was confirmed overnight to have the Delta variant.

She said genome sequencing showed the strain of the virus from the massage worker had not clustered with any known cases in Queensland.

"It's clustering most closely with some cases of the Delta variant in Victoria from middle of September," she said.

"I'm working through with the businesses that she attended as to whether there are any cases, but I am reassured because in the last seven days here in Queensland we've done over 112,000 tests."

Dr Young said she was also confident the aviation cluster was under control because everyone at risk from that outbreak was already in quarantine.

She said it was reassuring to see positive cases being fully vaccinated.

"We know that if you're double vaccinated, that reduces your risk of transmitting the virus on, to 25 per cent, so you have one quarter the risk of someone who's not vaccinated, from passing on the virus," she said.

Meanwhile, Queensland Police Service (QPS) Deputy Commissioner Steve Gollschewski said "some" QPS employees have resigned over the vaccine mandate, which requires staff to have had their first dose by Monday and a second by January 24.

"The numbers are quite low, we have had some people resign, and that number's changed on a daily basis but the numbers are low," he said.

Asked how low the numbers are, he replied: "I'm saying a handful per district across the state, we're collating those figures as we speak at the moment, and we'll have a clearer view later in the week."

On Monday night, police intercepted a B-double truck at a border checkpoint at Tugun.

"As police interviewed the driver, an officer observed a female hiding under a blanket in the back cab of the vehicle," QPS said in a statement.

Both the driver and passenger were fined $4,135 for breaching the Chief Health Officer's directions.