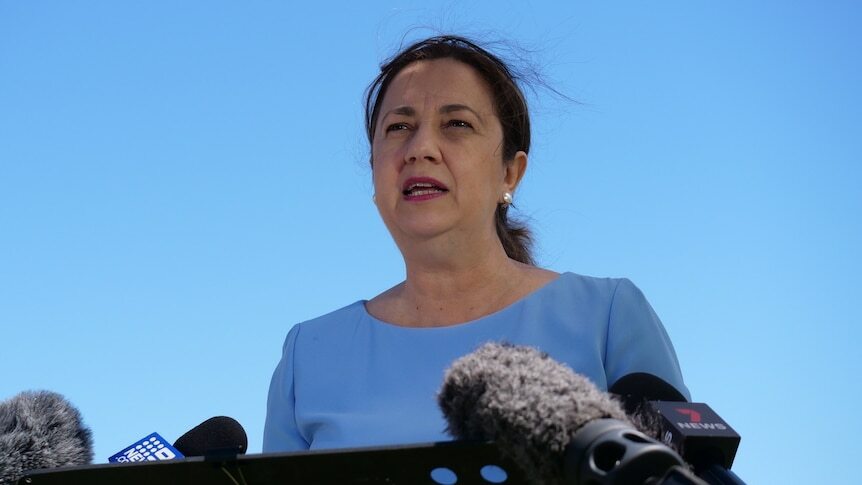 Premier Annastacia Palaszczuk says the state government has done all it can to encourage Queenslanders to protect themselves against COVID-19, after three unvaccinated people died of the disease.

The state has also confirmed 23,630 new cases in the latest reporting period.

There are now 589 people in hospital requiring treatment, including 41 in intensive care units. Fifteen of those are on ventilators.

Two of the latest deaths were people in their 70s and one was in their 60s. None had been vaccinated.

More people have been recorded as dying of COVID in Queensland in the past week than in the previous two years of the pandemic.

When talking about the latest deaths, Premier Annastacia Palaszczuk said the government had tried hard to get the public to receive vaccinations, especially in Indigenous communities where vaccine uptake has lagged.

"Every Queenslander has had the opportunity to get a vaccine," she said.

"Let me make it very clear: The vaccination will help prevent serious disease and the booster is an added layer. It is not too late.

"People have gone door-to-door, I mean, I don't know what else we can do?"

The state's new cases include 10,182 infections confirmed by rapid antigen test, but the total number of cases is likely to be much higher than government figures indicate due to people being unable to get access to a test.

Chief Health Officer John Gerrard said there had been a "steady increase" in the number of COVID-19 patients in the state's hospitals.

"The increases are across Queensland, in all regions," Dr Gerrard said.

"There seems to be particular growth in Brisbane, south of the river.

"Not explosive growth, but steady growth across the state."

Queensland is still projected to reach its peak of the Omicron outbreak during the last week of January, Dr Gerrard said, "about two weeks" behind New South Wales.

"You would have seen in the media this morning that New South Wales believes they are at their peak," Dr Gerrard said.

"We are going to see steady growth until we reach a peak some time in the next two weeks."

Because Queensland is a decentralised state, Dr Gerrard said different regions will reach their peak at different times in coming weeks.

The Chief Health Officer said the stabilisation of hospitalisation rates, rather than the number of cases, helped determine a peak.

"So presumably, and this is a bit speculative, Gold Coast, which was the first region to seem to get its growth, presumably, will reach its peak earlier than other parts of Queensland," he said.

Health Minister Yvette D'Ath said nearly 6 per cent of children aged five to 11 have had their first dose of vaccine, since becoming eligible on Monday.

Another 45,000 are booked in at state-run clinics.

The Premier yesterday announced that from 1:00am Saturday morning Queensland will lift the requirement for domestic travellers to have a negative COVID test and fill out a border pass.

The government said international restrictions will apply until the state hits the 90 per cent vaccination target, due to the risk of them bringing in new COVID variants.