By Julius Dennis and staff 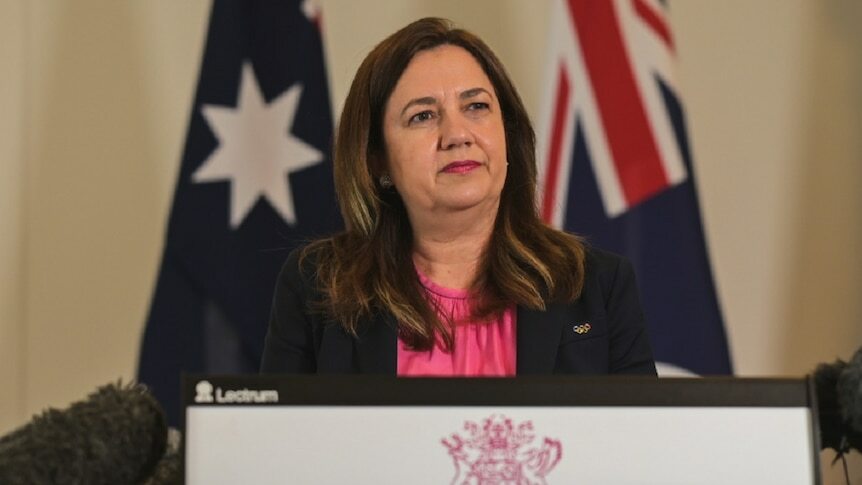 Queensland Premier Annastacia Palaszczuk has announced border restrictions on interstate travellers will be removed earlier than planned, on the same day the state recorded its largest number of COVID-19 deaths.

Two of those who died were aged in their 70s, three in their 80s and one was aged over 90.

"All had significant underlying medical conditions," he said.

Five were double vaccinated, one was unvaccinated and none had received a booster shot.

It is the largest number of COVID deaths recorded on a single day in Queensland, with 17 deaths now recorded since the pandemic began almost two years ago.

Ms Palaszczuk said it "will be a very difficult time" for the families of those who died.

"These are people's grandparents, brothers, sisters, uncles," she said.

"When you think about during the whole two years of the pandemic, we lost seven people, to lose six in one day is a big shock."

Ms Palaszczuk said 556 people are being treated for their symptoms in hospital and of those, 26 are in intensive care units. Ten people are on ventilators.

Of the 14,914 new cases recorded in the latest reporting period, 2,812 were positive cases confirmed by at-home rapid antigen (RAT) test.

The Premier also announced Queensland will lift the requirement for domestic travellers to have a negative COVID test and fill out a border pass before entering the state from 1:00am Saturday morning.

Those requirements were due to be removed when the state hit 90 per cent double-dose vaccination of those 16 and over.

"Now is the time for the barricades to come down, and for the police to come home, to continue on their normal operational duties on the front lines," Ms Palaszczuk said.

"The time is now right as we head towards hitting that 90 per cent next week."

Dr Gerrard said the domestic border restrictions had served their purpose, which was to allow Queenslanders time to access the vaccine.

"Now the virus, as always was expected, is spreading through Queensland, but with a vaccinated population," he said.

International restrictions will still apply until the state hits the 90 per cent vaccination target.

Health Minister Yvette D'Ath said the government had chosen to wait because "international arrivals are the ones who are going to bring in new variants".

Ms Palaszczuk said the states and the federal government were trying to procure as many RATs as possible.

Those ordered by the state government are being distributed to health care workers, police, firefighters, corrective service workers, and to Queensland health testing clinics to distribute to close contacts.

Ms Palaszczuk said those procured by the federal government would be made available to seniors.

"It's going to be a hot topic of discussion today at national cabinet," Ms Palaszczuk said.

A Queensland government spokesperson said on Wednesday the Commonwealth was also responsible for ensuring supply for pharmacies and the private market.

"Just like with vaccine supply last year, it's clear the Commonwealth have failed to ensure enough supply for Queenslanders," the spokesperson said.

Queensland Transport Minister Mark Bailey said 20,000 RATs ordered by Queensland Rail for its essential workers were taken away by the federal government.

"They were ordered some time ago, and we've just been advised quite recently that order has been revoked," he said.

"We will be seeking from the federal government an assurance that our rail workers who had ordered these tests on time, that they have access to them so that they can keep our rail services operating here in Queensland."

However, the federal Department of Health has since said in a statement that "widespread reports" that supplies of RAT kits were being redirected back to them were "untrue".

"The Department of Health reaffirms that the Department has not requisitioned all RAT supplies within and entering Australia," the statement said.

"The Department has made purchases in accordance with Commonwealth Procurement Rules, and has not sought to place itself ahead of other commercial and retail entities."

It said it expected RATs supply would normalise over the coming weeks.

"The Australian Government has secured more than 80 million RATs for delivery in January and February," it said.

"State and territory governments also advise that they have placed orders for approximately 130 million RATs."

Social restrictions will remain in place for unvaccinated people and they would not change when the state reaches the target.

Ms D'Ath also said statements made on social media that the government had decided to allow unvaccinated health workers to return to work were "not correct".

"We are not planning, nor are we welcoming back unvaccinated health workers into the health system at all," she said.