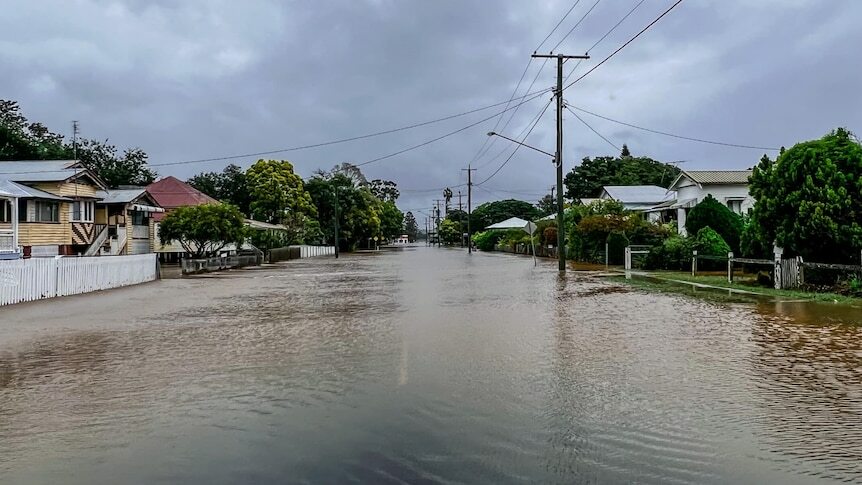 Queensland floods live: Emergency alerts issued as severe weather system brings heavy rain south
More than a dozen emergency alerts have been issued across Queensland, from the North Burnett to the NSW border, as…

The Guardian - AU
Intense rain to linger over flooded Qld

More than 530 roads have been affected and 14 state schools were closed, with further heavy falls forecast

Several south-east Queensland communities are on flood alert Thursday evening after days of heavy rain, with Gympie bracing for six-hourly falls of up to 160 millimetres early on Friday and into the evening.

The Sunshine Coast Regional Council has also issued an emergency alert, with local authorities concerned about flooding, particularly around Noosa and the hinterland.

Warnings have also been issued for the North Burnett, Lockyer Valley, Killarney on the Southern Downs, Cooby Creek near Toowoomba, and Cressbrook Creek and Mount Tarampa in the Somerset Region.

The severe trough that has been pounding North Queensland with rain has moved south, with waterways across south-east Queensland swelling after heavy rain.

Bureau of Meteorology (BOM) Laura Boekel said there would be no reprieve just yet.

"For the south-east, including Brisbane and the Gold Coast, we are expecting to still see more rainfall and it's very much an evolving situation, so we're currently assessing what warnings we will be issuing for those areas," she said.

"We're absolutely urging people to stay across the forecast and the warnings because we still have a couple of days of rainfall in very saturated catchments."

Police have now located a 36-year-old man safe and well who was reported missing about 10am on Thursday.

He had last been seen at a campsite at Imbil, south of Gympie, late Wednesday night.

The campsite was isolated due to several flooded river crossings and police conducted an aerial search of the area.

Swiftwater rescue boats were also used in the search.

Premier Annastacia Palaszczuk said 14 schools had been closed across the state and residents in the Lockyer Valley, west of Brisbane, had been doorknocked as a precaution as local creeks swell.

Ms Boekel said the BOM was expecting conditions to ease from Saturday.

"The risk of flash flooding and riverine flooding is very real for a lot of communities in Queensland over the coming days," she said.

Inland from Bundaberg, Moreton Bay and the Sunshine Coast hinterland were drenched overnight Wednesday, but west of Brisbane recorded the highest falls.

The Kluvers Lookout received 227 millimetres and Raynbird Creek 197mm in the 24 hours to 9am.

Multiple roads are currently impacted or closed by flooding throughout the south-east.

Despite there been above average rainfall in Lockyer Valley region, no records have been broken, Ms Boekel said.

An emergency alert was issued late Thursday morning, with Lockyer Valley Mayor Tanya Milligan urging people to take heed of official warnings, but said the community was in good spirits.

"We are expecting rain areas to continue across parts of central and eastern Queensland.

"Within these rain areas we could see thunderstorms, which could bring more intense pockets of rainfall as well as damaging winds.

"A flood watch continues for catchments across northern central and southern Queensland."

Grantham being doorknocked 'as a precaution'

"This is the third flood warning for the year but May is pretty late to be getting a flood warning," he said.

Ms Palaszczuk said police were doorknocking lower Grantham on Thursday "as a precaution".

She said emergency services had responded to 114 calls for help since Wednesday afternoon and swift water crews were called to five jobs, but no rescues were required.

The Department of Transport and Main Roads said more than 350 roads were currently being impacted by the wet weather.

"Because we've had a prolonged wet season this year, catchments are already wet in a number of locations across the state," he said.

"That means even with any small rainfall totals that are being forecast, we are expecting to see renewed river level rises.

Queensland floods live: Emergency alerts issued as severe weather system brings heavy rain south
More than a dozen emergency alerts have been issued across Queensland, from the North Burnett to the NSW border, as…

The Guardian - AU
Intense rain to linger over flooded Qld

More than 530 roads have been affected and 14 state schools were closed, with further heavy falls forecast